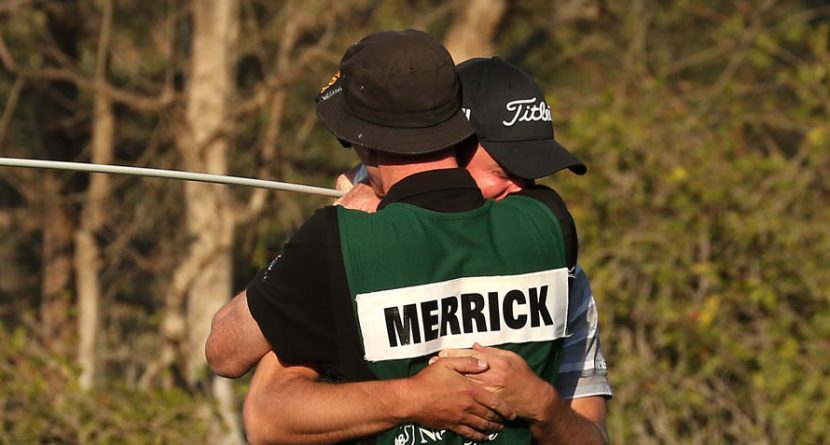 The Los Angeles Open has been a part of the PGA Tour schedule since 1926, boasting a galaxy of stars that includes Ben Hogan and two dozen other World Golf Hall of Famers.

Not until John Merrick’s come-from-behind triumph on Sunday, though, had a true local ever walked away with the trophy.

Merrick, a Long Beach native who as a UCLA golfer played Riviera Country Club a couple times a month with teammates, claimed that bit of local lore when he outlasted Charlie Beljan on the second hole of their Northern Trust Open playoff.

For the record, Merrick is the first Los Angeles County native to capture the Open. Corey Pavin, a winner in 1994 and ’95, grew up in nearby Ventura County (Oxnard). Freddie Couples may ooze California cool, but grew up in Seattle and didn’t move to LA until after turning pro.

• The Takeaway: Hello, Cinderella. Even while playing all those rounds at Riviera in college, the idea of winning there was beyond Merrick’s boldest imagination. Teeing it there up alongside some of the PGA Tour’s best, sure. But not winning. Nor did Merrick’s NTO track record offer much sign of a breakthrough: in 14 previous PGA Tour rounds at Riviera, he’d broken par just three times.

• The Shot: After finding a fairway bunker at the par-5 17th and pulling his second shot left, Merrick found just enough space between two trees to squeeze his next shot through. He wound up putting it on the green, escaping with a par that maintained his share of the lead.

• Trends: After opening the season with two missed cuts, Merrick found his rhythm with a tie for 16th at Pebble Beach before heading to L.A. His opening 68 matched his second-lowest round at Riviera, and he followed it with a 66 that matched his best. All four of the week’s rounds rank among his seven lowest at Riviera.

• Quote: “I live 45 minutes away. I went to school across the freeway at UCLA. I’ve been to this tournament more than any other tournament growing up, and this is my first win. The laundry list goes on and on, and yeah, it’s cool.”

• The Takeaway: Beljan showed last year’s win at Disney was no fluke, matching Sunday’s best round with a 4-under-par 67 and forcing the playoff with an 18-foot birdie at No. 18. But Riviera’s drivable par-4 10th hole proved his undoing, carding bogeys both in regulation and the playoff.

• Trends: On one hand, Beljan has three top-10 finishes in his past seven PGA Tour starts. On the flip side, he came to the NTO on a run of four missed cuts. But his putting suddenly came together at Riviera, needing 30 or fewer putts in all four rounds.

• Quote: “I think [No.10] a great hole, don’t get me wrong, I’m not knocking it, but it’s just a tough hole to have a playoff on. We might as well go and put a windmill out there and hit some putts.”

• The Takeaway: On his first visit to Riviera, the 2011 Masters champ opened with three rounds in the 60s and gave himself birdie looks on each of Sunday’s last three holes to join the playoff. But he missed a 10-foot chance at No. 16 and a 6-footer at No. 17, then again from 20 feet at the 18th.

• Trends: Brandt Snedeker notwithstanding, Schwartzel might be the hottest golfer on the planet. He hasn’t finished out of the top five in his past seven starts worldwide, including two European Tour victories. Check this run in his past five: 2nd-win-win-2nd-3rd.

• Quote: “I felt pretty comfortable from the time I got here. I had long travel to get here, and happy with the way I played. Happy to continue the form.”

• Bill Haas: The defending champ took a three-shot lead into the final round, only to open the door wide for everyone with a stretch of five bogeys in a seven-hole stretch around the turn. He lost the lead at the wily 10th, when his drive steamed through the green and he couldn’t hold the green with a pitch shot that rolled into a bunker.

• Frederick Jacobson: Coming off an injury-marred year, the Swede’s tie for third followed up a tie for seventh a week earlier at Pebble Beach. But he was kicking himself on the way out, yanking a 2-foot par putt that would have allowed him to join the playoff. One consolation: Jacobson found his way into the WGC-Accenture Match Play after Snedeker withdrew (ribs).

• Blayne Barber: After making headlines last fall when he took himself out of PGA Tour qualifying upon discovering he mispenalized himself, Barber got into Riviera as a Monday qualifier and claimed a check for 42nd. The Florida native also won twice on the NGA Winter Series right after his Q-school WD, so his karma’s in balance.