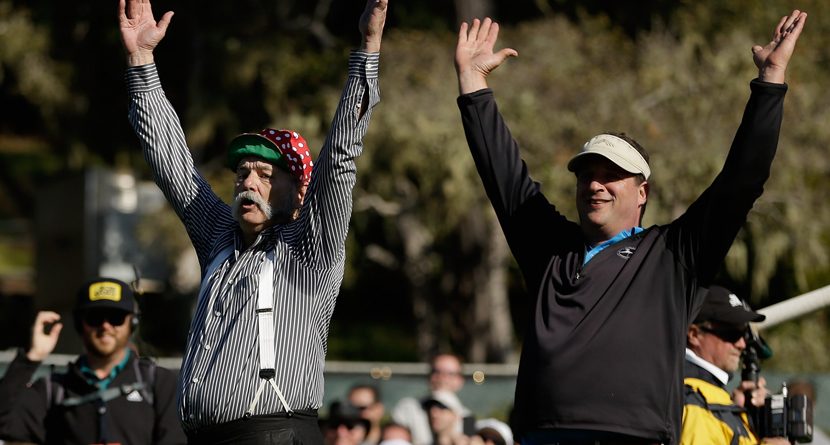 Brandt Snedeker did more than finally win a tournament Sunday. He swept away any doubts that, right now, he’s the best golfer on the planet.

After his two-shot triumph at the Pebble Beach National Pro-Am, Snedeker no longer can say he hasn’t done enough to be recognized as an elite player, as he did seven days earlier in Phoenix. A win, two seconds and a third might constitute a good season for all but the elite. Snedeker has done it in the first six weeks.

Tiger Woods beat Snedeker at Torrey Pines, sure, but he also missed the cut in Abu Dhabi. Phil Mickelson’s romp in Phoenix is his only top-30 finish in 2013. Meantime, Snedeker’s only finish outside the top 3 was a tie for 23rd at the Humana Challenge.

• The Takeaway: We already know what Snedeker can do when his putter gets hot. Credit improved ballstriking for putting him in position to make a few more birdie putts (or par saves) every round. On the Monterey Peninsula, Snedeker hit 43 of 55 fairways for his best showing in that category. On the year, he ranks No. 15 in driving accuracy and No. 6 in greens in regulation.

• The Shot: From 230 yards away at the par-5 second hole in the final round, Snedeker ripped a 4-iron that just carried the bunker protecting a front-left pin. His ball curled around behind the hole, then trickled back within 4 feet for an eagle that put him in control of the round. Snedeker played his first seven holes in 5 under par.

• Trending: Go back to the start of the FedEx Cup playoffs, and Snedeker has finished outside the top six just twice in his past nine official starts – a tie for 37the at the BMW Championship and his 23rd at La Quinta. He also tied for 11th at the WGC-HSBC Champions in China.

• Quote: “The last two weeks [I’d been] playing great, but running into two Hall of Famers really motivated me to go out [and show] that I can play good and handle the lead.”

• The Takeaway: A 64-66 weekend lifted Kirk to his second top-5 finish of the season, to go along with a tie for fifth at the Sony Open in Hawaii. The Sea Island pro notched 15 birdies on the weekend, leading the field for the week with 24 in all.

• Trending: On a West Coast Swing where going low is a must, Kirk has put up a lot of deep red in four starts. He’s posted 66 or better five times already this season, including a second-round 62 in Hawaii. In all, 12 of his 15 rounds this year have been in the 60s.

• Quote: “We’ve had a lot of tournaments like that on tour this year where somebody has really just kind of blitzed the field. I felt like I played well enough to win a golf tournament, and came up a little bit short.”

• The Takeaway: It’s been a big fortnight for the PGA Tour rookie. First the Korean-born pro becomes a YouTube sensation after breaking out some Gangnam dance moves after a Sunday birdie at No. 16 in Phoenix. Now Hahn has his second top-10 finish in the past month.

• Trends: Though not a huge bomber, Hahn ranks No. 4 on Tour in taking advantage of the par 5s. He’s 39 under par this season at the par 5s, including four birdies on the weekend between Spyglass Hill and Pebble Beach.

• Quote: “This week was the best tournament I’ve had so far. But being so close to winning a golf tournament, playing in the final group – it’s a little bittersweet.”

• Retief Goosen: A tie for ninth not only was the two-time U.S. Open champ’s best PGA Tour finish since 2011, it locked up his card for the rest of 2013. Back woes forced Goosen to cut last season short, given five starts in 2013 to earn the $76,336 that would have lifted him into the top 125 on last year’s money list and allows him to maintain PGA Tour status by completing a medical exemption in one start.

• Patrick Cantlay: The former UCLA star, who turned heads as an amateur with his play on sponsor invites, earned a $175,500 payday with his tie for ninth. It was his first top 10 since the 2011 Canadian Open, part of a five-week stretch when he also was low amateur at the U.S. Open and shot a 60 at Hartford. He’s on the Web.com Tour roster for 2013.

• Robert Garrigus: Tied for sixth heading to the final round, Garrigus stayed on Snedeker’s tail until unraveling with a quadruple-bogey 9 at Pebble Beach’s dastardly 14th. It sparked a slippage that also included bogeys at Nos. 15 and 18. The Phoenix pro wound up falling 16 places to finish in a tie for 22nd – costing him some $169,000 in the slide.

“I would love to be known as the best American golfer. I’ve got a long way to go to do that, but this is a great start to the year. … This is what I’m capable of, so I’m looking forward to putting more on display the rest of the year.” – Brandt Snedeker.