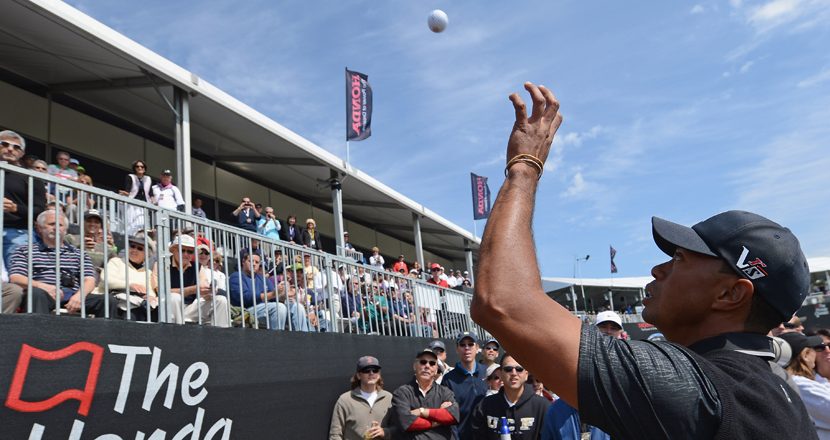 OK, raise your hand if you picked Michael Thompson to win The Honda Classic. Even if you had him as your longshot choice for the week.

Anyone? Yeah, that’s what we thought.

Hey, Thompson himself mostly just wanted to see the weekend after his first four starts of 2013 ended in three missed cuts and a tie for 78th at Torrey Pines. Rounds of 78-80 at the Northern Trust Open set the tone for a soul-searching week off back ahome in Alabama.

The layoff, though, allowed Thompson put his fledgling career into perspective. The Alabama grad could always fall back on that accounting degree, but days on the golf course are his happiest. And, he concluded, that would even be true if he had to step back to a lesser tour.

His mind freed, Thompson merely went out and beat perhaps the strongest field this year outside the WGC- Accenture Match Play. Even with Rory McIlroy and Tiger Woods spinning their wheels, world No.5 Justin Rose and five major winners were among Sunday’s pursuers.

• The Takeaway: Funny how much difference one week can make. Instead of worrying about keeping his PGA Tour card, Thompson has job security for the next two years. He also put his name in the PGA Championship – he already had Masters and U.S. Open berths locked up – and gained confidence that he can go toe-to-toe with the game’s elite.

• The Shot: After mud on his ball caused a wayward second shot at No. 10, Thompson hit a wedge off pine straw that he thought would wind up over the green. Instead, he was surprised to hear the gallery clap. He was even more pleased to see he was five feet from the hole. It began a run of six consecutive pars to start his back nine.

• Trends: Though it’s still early to make a definitive call, Thompson might be one of those guys who raises his game on tougher tracks. He tied for second at last year’s U.S. Open, and two other top-20s came at solid layouts – Riviera and Innisbrook. Recall, too, that he was runner-up at the 2007 U.S. Amateur.

• Quote: “I remember McGladrey two years ago, I got pretty nervous coming down the stretch.  And then the U.S. Open, the big lesson I learned was just to not look at the leaderboards. I think I looked at a leaderboard one time today, and even then I just kind of blocked it out of my mind.”

• The Takeaway: The Aussie’s best finish since the 2010 Deutsche Bank Championship not only ended a run of four missed cuts, it earned a spot in this week’s WGC-Cadillac Championship and put him one step closer to the Masters. Ogilvy rose to 47th in the newest world ranking, needing to stay inside the top 50 for four more weeks until Augusta National does late invites.

• Trends: Though this was Ogilvy’s first visit to PGA National, he’s finished lower than 14th just once in seven Honda appearances scattered across four different courses. He also was runner-up in 2006, the Honda’s last edition at Mirasol Club before moving across the street to PGA National. He also tied for second in 2001 at TPC Heron Bay.

• Quote: “I’m not in the Masters yet. Obviously I would have loved to have won here and sealed that, but at least I’ve gone the right direction.”

• The Takeaway: No.2 on last year’s Web.com Tour money list despite playing just 10 events, Guthrie grabbed the 36-hole lead with a Friday 63 but cooled off to weekend rounds of 71-73. Despite scores a 64 and 66 on the West Coast, it had led to nothing higher than a tie for 21st.

• Trends: Though Guthrie’s scoring average both before the cut and in Round 3 rank among the top 30, like many young players he’s still learning about the PGA Tour Sundays. His final-round scoring average jumps a full two strokes to 71.20, standing No. 104 on tour.

• Quote: “I haven’t played this much golf before, but last year kind of confirmed that I can play long stretches and consistently. I was very confident I could get out here and compete right away.”

• Erik Compton: A pair of weekend 70s lifted the two-time heart transplant recipient into a tie for fourth – his first top-10 finish on the PGA Tour. After telling his story repeatedly during last year’s rookie campaign, Compton is more relaxed in 2013 as he settles into being a competitor instead of a curiosity.

• Tiger Woods: One year after wowing the golf world with a final-round 62 at PGA National, Woods couldn’t break par even once this time. Three even-par 70s were followed by a closing 74, when Woods took penalty strokes for two shots in the water and a lost ball.

• Rory McIlroy: The spotlight on his early-season struggles only became harsher when McIlroy walked in after just eight holes Friday. A painful wisdom tooth was the explanation, but even Jack Nicklaus hinted the decision seemed hasty. Not in dispute is that the youngster has completed just 80 holes in 2013.

“I was having thoughts of, ‘I’m going to miss every cut this year.’ … We started talking, ‘Well, if that happens I’ll play in the Web.com Tour, or I’ll even go back to the NGA Tour. As long as I have a place to play golf, I’m going to be happy. And that give me a lot of comfort.” – Michael Thompson.