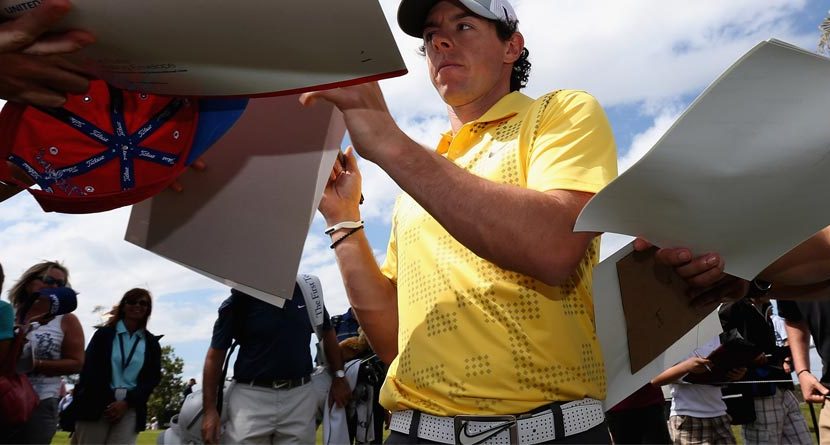 That invoice ought to arrive in Jupiter Island by the middle of the week.

It won’t, though. Steve Stricker is too nice to charge Tiger Woods for the putting refresher he gave last Wednesday on Trump Doral’s putting green. But caddies get little extra when their man wins, why not the timely tutor?

Consider this: If Woods had needed one additional putt each day at the WGC Cadillac Championship, Stricker would be holding that powder-blue trophy. Difference in the direct-deposit category: A cool $620,000.

And with Stricker cutting back to part-time status, a little extra in the nest egg never hurts.
But as Stricker himself surmised, Woods might have found the magic without his help. We all know there are certain venues where anything ailing in Woods’ game seems to get healthy in a hurry – Torrey Pines, Bay Hill, Firestone, Muirfield Village.
And Doral, where TW now has won four times in 10 visits to the TPC Blue Monster. Other than last year’s Sunday WD with a tender Achilles, he’s never finished outside the top 10 there.
Winner: Tiger Woods (-19)
• The Takeaway: With this one coming via the pull-away-by-Saturday mode of years past, Woods now owns five wins since the start of 2012. Only two other players can make that claim – No. 1 Rory McIlroy and Branden Grace, who notched all of his on the European circuit. Time to stop asking the question. Is Tiger back? Yes.
• The Shot: After a bogey at Saturday’s 17th hole opened the door a crack for a possible Sunday pursuit, Woods kicked it closed again when he drained a 16-foot birdie at the Blue Monster’s daunting No. 18. His four-shot lead restored, Woods could play the final round in cruise control.
• Trends: On the seven occasions in which Woods has posted multiple PGA Tour wins before the Masters, all but 2003 produced a major title by year’s end. He’s done the Torrey Pines/Doral double three times previously – winning the Masters in 2005, Open Championship in 2006 and PGA Championship in 2007.
• Quote: “I would like to say I probably would have [won anyway], but… there’s a but there. I’d been putting at home and just still hadn’t felt right. I still was a little bit off. … [Stricker] basically got me in the same position that I was at Torrey.”
Runner-Up: Steve Stricker (-17)
• The Takeaway: Three starts in 2013, two runner-up finishes. If Stricker decides teaching isn’t really his calling, he could always go back to playing. All jesting aside, the less-is-more approach seems to be agreeing with his 46-year-old bones. At $1.82 million, he’s already halfway to last year’s earnings.
• Trends: Stricker not surprisingly leads the PGA Tour in the strokes gained-putting category, picking up an average of 1.3 strokes on the field per round. And he’s especially proficient at Doral – it’s been 256 holes since his last three-putt on the Blue Monster, back in 2010’s second round.
• Quote: “I’m enjoying what I’m doing. I know deep down that I’m only playing 11 times, and that excites me. But I also get very pumped up and excited to play when I do come out.”
T-3: Adam Scott (-14)
• The Takeaway: Also making just his third start of 2013, Scott improved his score each day in building to a Sunday 64 that was the best of the week. That was the Aussie’s best round since he opened with the same number at last year’s ill-fated British Open.
• Trends: Scott now has recorded six top-15 finishes in his past 10 World Golf Championships starts, including his victory at the 2011 WGC Bridgestone Invitational. Toss out his one-and-done habit at the WGC Match Play, and he’s only missed the top 15 once in his past seven WGCs.
• Quote: “I don’t know if you can ever say you can feel that [64] coming on around Doral. I got off to hot starts Friday and Saturday on the front side and [wasn’t] able to capitalize on it, so it was great to keep it all going.”
Three of Note
• Rory McIlroy: After enduring the fallout from his impetuous WD at PGA National, McIlroy kept a low profile and ended his week with a 65 that lifted him to a backdoor top-10. It was an encouraging sign that the adjustment period to those new Nike sticks may be rounding a corner.
• Michael Thompson: The Honda Classic winner showed his victory at PGA National was no fluke, tying for eighth after posting his first three rounds in the 60s. Thompson recorded just four bogeys through his first 64 holes, before enduring two in back-to-back fashion at Nos. 11 and 12.
• Scott Brown: The South Carolina pro wasn’t at Trump Doral, but won the Puerto Rico Open to regain fully exempt status for two years. Slated to split time between the PGA Tour and Web.com Tour after placing 148th on the money list last year, Brown used a Friday 63 as a springboard.
The Last Word

“[Woods’] belief in himself again looks very similar to when he was in the early 2000s – or you can pick any year when he was playing great. He just seems in a better place mentally, to me. He seems to be having fun; seems to have a lot of confidence in himself and his game.” – Steve Stricker.