The USGA Admits They Messed Up The U.S. Open 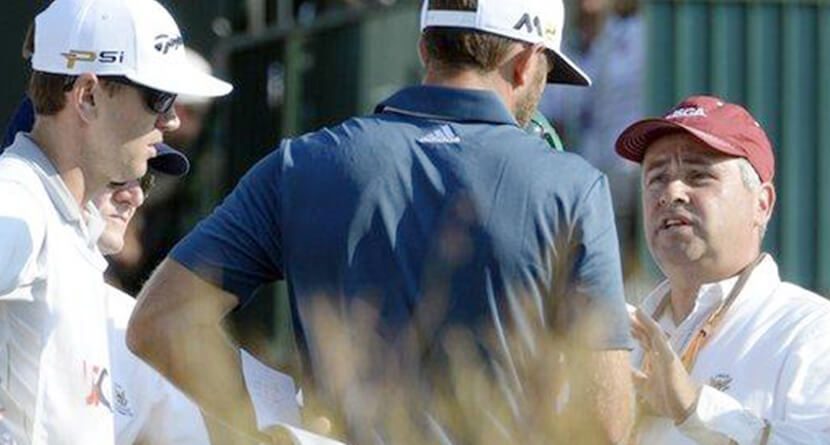 The ending and the aftermath of the 116th U.S. Open was as much about the organization putting it on — the USGA — as it was the eventual winner — Dustin Johnson. After clearing DJ of any wrongdoing on the fifth green for a ball that moved from a place of rest, the USGA decided to take a closer look at the incident and eventually penalized Johnson after the round was completed.

The USGA will review the video of No. 5 with Dustin Johnson immediately following his round. A determination will be made at that time.

The problem with the ordeal was that Johnson, along with the handful of other players on the course competing for major championship glory had no real grasp of what exactly was going on, where they stood in relation to the lead and perhaps most importantly, how they should adjust their strategy to give themselves the best chance to win.


On Monday, following a firestorm on social media, the USGA released a statement, more or less copping to causing an unnecessary and unfair distraction during the final few hours of the U.S. Open.

The USGA wishes to congratulate Dustin Johnson on his victory and thank him, and the other players in the field, for their professionalism and grace throughout the championship. Dustin is a wonderful champion, a talented golfer and a gentleman.

Our team at the USGA has seen and heard a great deal of discussion and debate about the ruling on Dustin’s ball moving during the final round of the 2016 U.S. Open Championship at Oakmont Country Club. In addition to the explanations we offered upon the conclusion of the final round, we add these comments.

Upon reflection, we regret the distraction caused by our decision to wait until the end of the round to decide on the ruling. It is normal for rulings based on video evidence to await the end of a round, when the matter can be discussed with the player before the score card is returned. While our focus on getting the ruling correct was appropriate, we created uncertainty about where players stood on the leader board after we informed Dustin on the 12th tee that his actions on the fifth green might lead to a penalty. This created unnecessary ambiguity for Dustin and the other players, as well as spectators on-site, and those watching and listening on television and digital channels.

During any competition, the priority for Rules officials is to make the correct ruling for the protection of the player(s) involved and the entire field. In applying Rule 18-2, which deals with a ball at rest that moves, officials consider all the relevant evidence – including the player’s actions, the time between those actions and the movement of the ball, the lie of the ball, and course and weather conditions. If that evidence, considered together, shows that it is more likely than not that the player’s actions caused the ball to move, the player incurs a one-stroke penalty. Officials use this “more likely than not” standard because it is not always apparent what caused the ball to move. Such situations require a review of the evidence, with Decision 18-2/0.5 providing guidance on how the evidence should be weighed.

Our officials reviewed the video of Dustin on the fifth green and determined that based on the weight of the evidence, it was more likely than not that Dustin caused his ball to move. Dustin’s putter contacted the ground at the side of the ball, and almost immediately after, the ball moved.

We accept that not everyone will agree that Dustin caused his ball to move. Issues under Rule 18-2 often require a judgment where there is some uncertainty, and this was one of those instances. We also understand that some people may disagree with Rule 18-2 itself. While we respect the viewpoints of those who disagree, our Committee made a careful and collective judgment in its pursuit of a fair competition played under the Rules of Golf.

In keeping with our commitment to excellence in all aspects of our work on behalf of the game of golf, we pledge to closely examine our procedures in this matter. We will assess our procedures for handling video review, the timing of such, and our communication with players to make sure that when confronted with such a situation again, we will have a better process.

We at the USGA deeply appreciate the support of players, fans, and the entire golf community of our championships and our other work for golf – and we appreciate your feedback as well. We have established an email address (comments@usga.org) and phone mailbox (908-326-1857) to receive comments. We thank you for taking the time to share your thoughts.

We all share an abiding love of this great game. Let us continue to work together for its good.

Man, would it be great to get the passcodes to those sift through those two comment centers.

As it is, the USGA dodged a bullet with Johnson winning handily and it’s good of them to continue the conversation by releasing a statement to further explain their side of things. Reasonable people can disagree on whether or not DJ caused his ball to move, but what we all agree upon is that the situation was handled poorly by the USGA.

At least they’re willing to admit that as well.