Then & Now: The Tale of Two Tigers 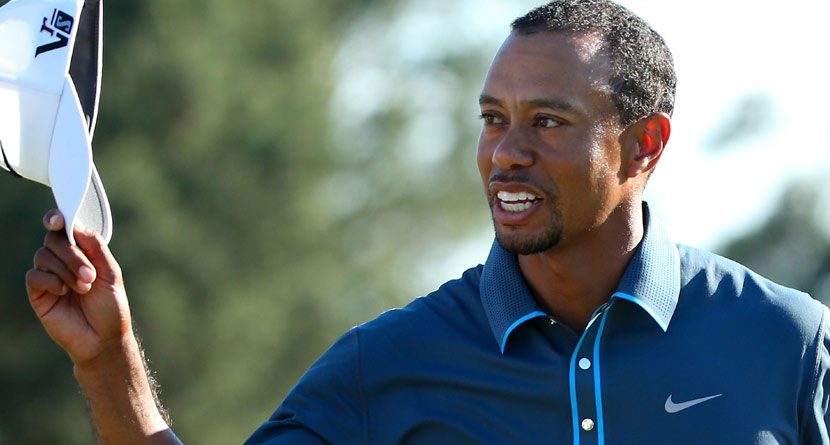 Tiger said before the U.S. Open that all of his major championship victories have been hard.  None will be harder than the next one.  Number 15 will be the second most significant major championship of Tiger’s career.  The “win for the ages” victory at Augusta in 1997 set the stage, but the lights have dimmed in the five years since 2008 and the audience has gone home.

There is no question that the game is there.  Four victories this year prove that Tiger’s game, when healthy is more than enough to win more majors.  But there are only four tournaments a year that really matter anymore for Tiger and they hang over his career like a shroud obscuring accomplishments that would define any other player’s career.

This is hardly an attempt to garner sympathy for Tiger.  He is the one that set the bar at 19 majors.  He said it right from the beginning.  He put the sports world on notice that he could and that he would become the greatest player of all time.   Looking back it is clear that there was less bravado in his words than those suggestions might indicate.  It was matter of fact and everyone in the game believed it.

His will was not an intangible thing that drove him.  He wore it on his face, in his scowl and his purposeful stride.  You could see it in the way that he carried himself with single-minded focus and desire unlike any we had ever seen.  We were reminded that no matter how good anyone else could be on any given week, his best was better.  Furthermore he could summon it more often than any who had come before.

But Tiger is stuck on 14 and has been through the better part of five seasons now and number 15 looks a lot further away than it did in April when Tiger’s approach on 15 struck the pin and spun back into the hazard.  It slipped even further away in suburban Philadelphia last month.

In the annals of sports comebacks, Tiger’s has been astonishing.  Few have been disgraced in the manner that he brought on himself at one point in time.  Even fewer have emerged from that to reclaim not only their game but their good name.   In half a decade Tiger has gone from a late night punch line to A–lister again, complete with adoring family and celebrity girlfriend.

There is but one thing left to accomplish and it may just be the toughest yet.  While Tiger seems more comfortable in his own skin off the golf course in the biggest moments and on the grandest stages, there is something missing.  He was always the guy who seemed like he could have it all.  He is that guy again but it is getting harder and time is passing.

This final act of Tiger’s career will indeed be the most interesting.  When Tiger started working with Sean Foley he said that first he would win with consistency on the PGA Tour and then the majors would follow.  He has accomplished the first part and I believe that the second part will follow and here is why.  No player in history, with the possible exception of Jack Nicklaus, has ever been able to peak their game at the right time as frequently as Tiger.  His quest to return to form wasn’t subject to the calendar, it was a product of a process to get there as quickly as possible.

His game, his swing and his life all seem to be on more solid ground then they have been in some time.  Now it is a matter of peaking at the right time.  He knows how to do that, we have seen it 14 times.   It won’t be easy.  With every passing major it will get a little harder.  But I believe that if he can stay healthy for a long enough period of time that the nearly two-decade-old prognostications will come to fruition.

Either way, four times a year Tiger’s drive for 15 and beyond is the most compelling story in sports.  And it should continue to be one heck of a ride.