Three-Way Tie Atop Leaderboard At The Hero World Challenge 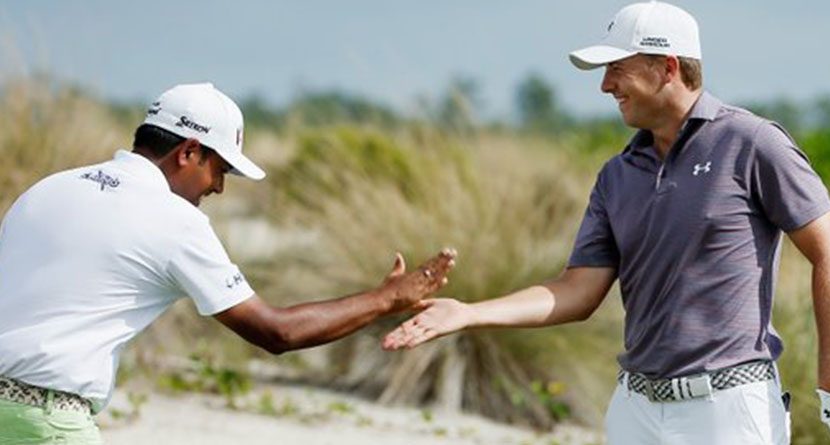 The first round of the Tiger Woods-hosted Hero World Challenge did not disappoint. 17 of the 18 entrants, all of whom are ranked inside the top-43 in the world, managed to break par on the opening day at the Albany Championship Golf Course in New Providence, Bahamas — Hideki Matsuyama’s 3-over par 75 being the only exception.

The small field was dispersed over nine tee times across an hour and 20 minutes on Thursday with action going on all over the Ernie Els-designed course. Spieth got the excitement pumping early in his round on the par-3 second hole.

And just a few minutes later, Chris Kirk (-3) holed out for an eagle of his own.

From T13 to T2 with one swing. #QuickHits https://t.co/jvwj7aJsnV

The Albany layout features five par-5s and five par-3s, which tends to favor guys like Bubba Watson and Dustin Johnson who bomb it. For the eccentric pair, however, things were a little tough out on the course. For Watson, some of his issues were mud-enduced.

Bubba yelling, “MUD BALL!” might as well be, “NOT MY FAULT!” pic.twitter.com/J7ektzPApi

Bubba still played the par-5s in 5-under (three birdies, one eagle) despite playing a course he felt “is better than (he is)”.

For DJ, his problem came from spending time in the water and no, it did not involve a jetski. He sliced the heel of his right foot when removing his swimming fins. The cut couldn’t be stitched shut, so instead doctors glued the cut together. Undeterred, if not a bit hobbled, Johnson fired a 4-under par 68.

The second round kicks off tomorrow at 10 a.m. with Golf Channel on the coverage starting at noon.