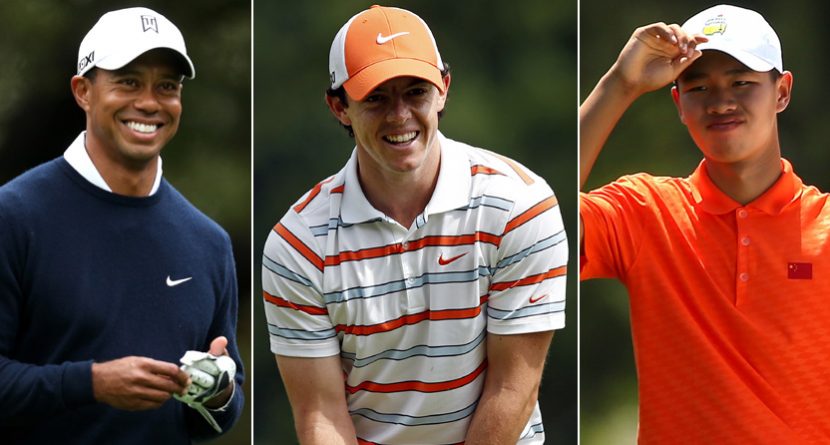 Before Tiger Woods and Rory McIlroy attempt to beat each other in The Match at Mission Hills, they will first try to fend off 14-year-old Tianlang Guan in a skills challenge.

The Mission Hills Golf Club announced Monday that the teenager – who in April became the youngest player to compete in the Masters, at which he also became the youngest player to make the cut in a major – will join the two pros on the practice range during their warm-up session for The Match on Oct. 28. They will then take aim at targets 50, 100, and 125 yards away and strategically placed around the range, while young Chinese golfers look on. Woods and McIlroy will also put on a clinic for the Chinese National Junior Team.

“It’s pretty exciting for me to compete against Tiger Woods and Rory McIlroy in a skills challenge before they play The Match at Mission Hills,” Guan said in a statement. “As the event is taking place in China, I hope to get some local support. I might have a chance because these are short targets – I’m glad it’s not a long-driving contest!”

Woods is familiar with Guan’s game, as the two played a practice round together before the Masters. Guan has never played with McIlroy, but he also spoke with him at the Masters.

“Both Tiger and Rory achieved a lot of success when they were teenagers, so I always appreciate it whenever they offer advice,” Guan said.

“The skills challenge with Guan should be fun,” Woods said. “I’m really excited about his future and what he’s doing for the profile of golf in China, so it’s great he’ll be a part of The Match at Mission Hills. I know we’ll have a lot of junior golfers watching us that day and it’s great that this has been added into the mix.”

“Junior golf development has always been a key component of our tournament schedule here at Mission Hills,” said Tenniel Chu, the Vice Chairman of Mission Hills Group. “We’ve hosted something in the region of 14,000 rounds of junior competition since 2006. Whenever there is appropriate international platform, with golf legends’ presence, we are determined to include junior golf elements, as we view these as both golf and educational opportunities for young players across the world.

“The presence of Guan Tianlang at The Match at Mission Hills will be very exciting for spectators and viewers. I know people will look forward to seeing him compete in a skills challenge against Tiger Woods and Rory McIlroy, and I’m sure both pros will be keen to make sure they beat a 14-year-old, even if Guan is pretty exceptional for his age.”

Three of Mission Hills’ courses are free to play on for players under the age of 16, and The Match at Mission Hills will be free of charge for all fans under 18.