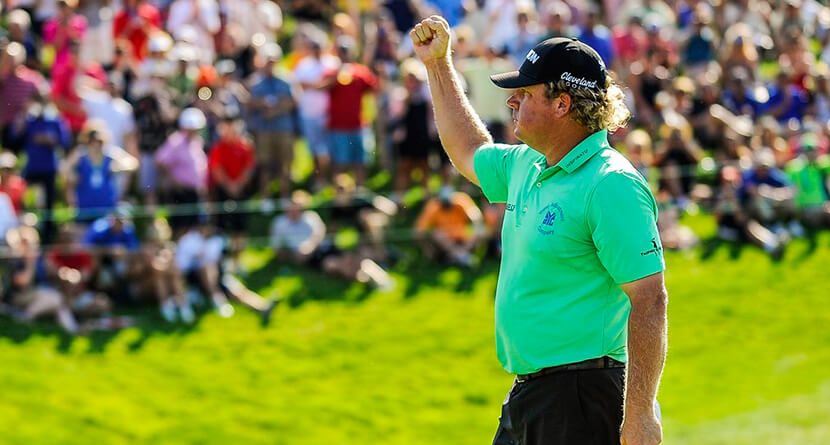 No matter how long it’s been since Tiger Woods last teed it up competitively, it seems like his fingerprints are all over the modern PGA Tour from week to week. The Memorial Tournament — an event Woods has won five times — was no exception as a conversation he had with eventual winner William McGirt in 2012 helped to get the 36-year-old journeyman pro his first PGA Tour win.

McGirt relayed the story that changed the way he played in final rounds to the media on Saturday night. Playing in the 2012 Canadian Open, McGirt was in contention heading into Sunday, one of the first times he had been in that position on the PGA Tour. Instead of scoreboard watching and knowing exactly where he stood, McGirt wanted to keep his head down, play his own game and let the chips fall where they may.

ESPN.com’s Jason Sobel relays the back-and-forth that ensued the following week at the PGA Championship between McGirt and Woods:

The end result? He posted a respectable 1-under 69, but still lost by a stroke.

Eight days later, around 8 a.m. on Monday morning of the PGA Championship, McGirt was on the practice green when Tiger Woods’ caddie, Joe LaCava, approached to congratulate McGirt on the strong finish.

“I only have one regret,” McGirt told him. “I never looked at a leaderboard all day.”

Stroking putts nearby, Woods instantly spun around and confronted his fellow pro.

Until this moment, the two of them had barely crossed paths, let alone shared a conversation. That was about to change.

“What?” Woods exclaimed as he walked toward McGirt until they were nose to nose. “OK, spill the beans.”

McGirt proceeded to explain that it was the first time he’d been in that position, and he didn’t want to get caught up with checking where he sat amongst the contenders.

After listening to that explanation, Woods looked him in the eye and responded, “You think Kobe [Bryant] doesn’t look at the scoreboard with a minute to go in the game?”

He then offered a few more choice words, followed by three that McGirt will never forget: “You’re an idiot.”

On a rainy Sunday at Muirfield Village, entering the final round as a co-leader in the final group, McGirt took Woods’ advice. Asked how many times he looked at the leaderboad during his round given what Tiger had said to him four years prior, McGirt answered, “every chance I got.”

Knowing exactly where he stood at every turn, McGirt was able to avoid the blow up that seemingly every other player atop the board was succumbing to. 17 pars and one birdie later, McGirt found himself in a playoff. When Jon Curran couln’t get up and down from a tricky spot long and left of the 18th green on the second playoff hole, McGirt had won his first PGA Tour event.