Tiger On Making Up With Sergio: ‘No’ 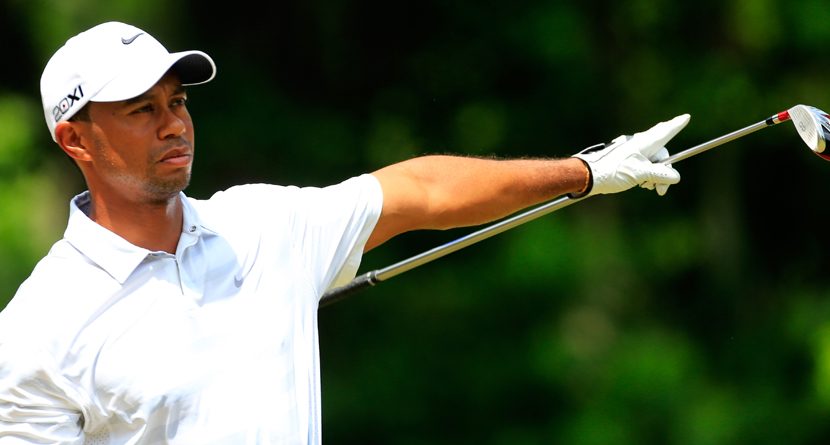 Previous Page: What We Learned At The Byron Nelson

Apparently Tiger Woods has no desire to make up with Sergio Garcia, the Spaniard with whom he had a public spat at the Players Championship.

“No,” was Woods’ answer when asked if he would reach out to Garcia to patch things up.

The world’s No. 1 golfer spoke at Congressional Country Club in Bethesda, Md. on Monday, the site of the AT&T National June 27-30. After a news conference, he told USA Today a bit more about the incident at TPC Sawgrass, when the two were paired together for the third round.

Woods hit his tee shot left into the gallery on the second hole, and when he pulled out a fairway wood from his bag, Garcia — who he could not see from his vantage point — was in the middle of his backswing in the fairway. The crowd cheered when Woods extracted the club and Garcia ended up blocking his shot to the right into the forest when the noise erupted.

“Obviously, the matter has been put behind me. The truth came out,” Woods said. “As I was saying the entire time, I told people what I had heard and what had happened.”

Woods’ story, in which he claims marshals gave him the go-ahead to prepare to take his shot, has been questioned by some — including marshals present on the hole. It was suggested that Woods pulled the club out on purpose, knowing that Garcia had not yet hit his ball, because the two have been feuding for years.

Other folks have now come forward to say that someone did alert Woods that Garcia had hit his shot, and that Woods is simply getting his timeline confused.

Garcia was visibly frustrated after hitting his errant shot, and he made his feelings known after the round.

“I’m not going to lie, he’s not my favorite guy to play with. He’s not the nicest guy on tour,” Garcia said.

Whatever the truth is, the story has been entertaining.

The AT&T National benefits the Tiger Woods foundation. The entry list has yet to be posted on the event’s website, but we’re guessing Garcia will not be there.