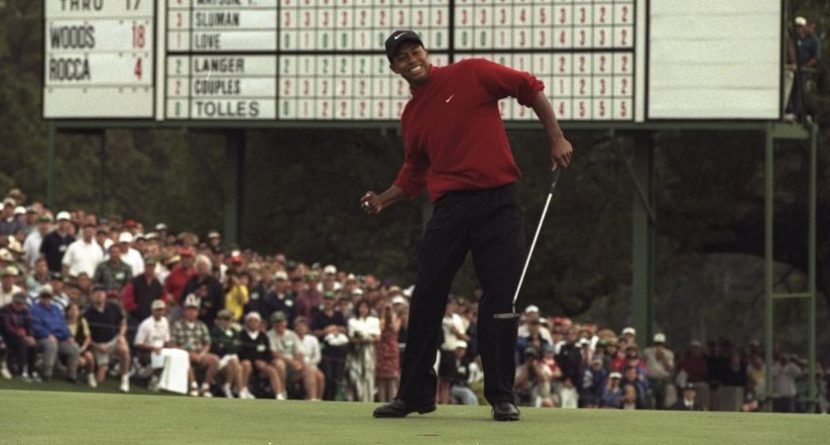 Dufnering isn’t the first golf participle to be created in a recent years by combining a player’s name and the suffix “ing.”

We submit these six participles – past and present – that golf fans know all too well.

Of course, there’s Tiger-ing — or, as it’s better known, fist pumping. With the popularity of “Jersey Shore” waning, maybe it can just go back to being a fist pump. The origination of the fist pump is unknown, but it happened sometime between when Tiger was on TV with Mike Douglas and when he beat Trip Kuehne at Sawgrass in 1994.

If you’ve seen Phil Mickelson walk around anywhere, you’ve probably seen Phil-ing. He gives the thumbs up to almost everyone. When he’s winning, it’s rampant. It seems this practice began at the 2010 Masters, as he was striding to his third green jacket.

Then there’s Keegan-ing — golf’s version of the stink eye, which Bradley gives to a putt as he lines it up with his belly putter. From the photographic record of the first 18 months or so of his PGA Tour career, Bradley didn’t do this. Then at the WGC-Bridgestone Invitational, Bradley broke it out to beat Jim Furyk on the 72nd hole. He’s been doing it ever since.

How about Bubba-in’? (Drop the “g.”) That’s the phenomenon of the Masters champion buying famous stuff, including the General Lee from “The Dukes of Hazzard” and Tiger Woods’ old Isleworth house, where he Dufnered last night. We would also accept “shaping a crazy shot” as Bubba-in’.

Perhaps the best participle is DJ-ing. The guy is constantly dating or rumored to be with a gorgeous woman, like Paulina Gretzky or Natalie Gulbis. And, bringing up the rear, is Na-ing. Kevin Na twice has intentionally missed the golf ball with a practice swing that looked like he was really trying to take a cut. He did it in Las Vegas and, perhaps more famously, at The Players last year.