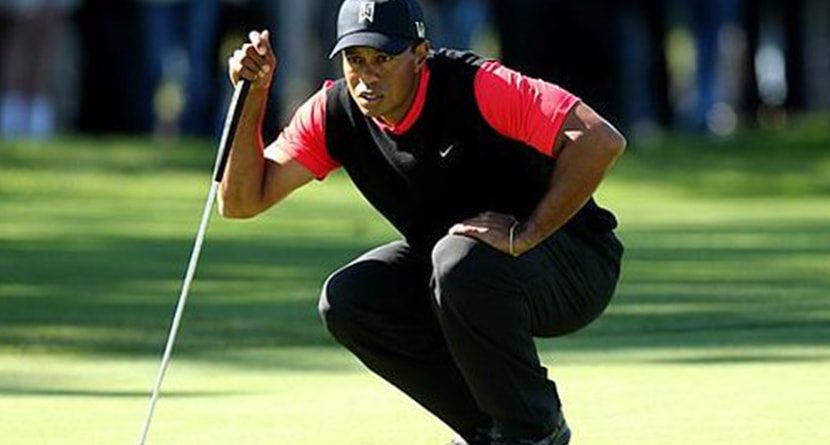 2016 has been a strange year if you’re a Tiger Woods fan. The Team Tiger spin machine has been in overdrive since January.

Rumors that Woods couldn’t sit up straight were rebuffed quickly by Woods posting a video of him swinging a 9-iron into a simulator. Following that episode, Woods’ camp stuck to their “no timetable” stance.

Next, rumors swirled around the 14-time major winner playing in the Masters only to be quashed by a late Friday night press release announcing that while he’s made progress, he wouldn’t be teeing it up at Augusta.

Regardless of what is reported, positive or negative, it seems as if Woods and his team want to keep expectations and projections straight down the middle.

On Monday, it was widely reported that Woods had registered for the U.S. Open at Oakmont, although the news had been out there for weeks and the registration was merely “procedural,” according to his agent.

So, Tiger Woods has registered for the U.S. Open. Which doesn’t necessarily mean he’s playing. But might mean he’s not not playing. Got it?

With a sliver of hope peaking through the clouds, Woods closed it up during the official opening of his first domestic course design, Bluejack National, Monday evening.

RG: The tee shot on the long 18th hole. pic.twitter.com/KdI9dQHi1V

Playing five holes with friend Mark O’Meara, Woods looked to be in line with the reports that he had been ramping up his practice schedule, once again fueling rumors that his return to competitive golf was imminent.

Based on his progress it makes sense @TigerWoods comes back sooner than later. Indications point to @WellsFargoGolf–@THEPLAYERSChamp return.

Then, in his sit-down following the 5-hole exhibition, Woods debunked much of what had been reported about his progress.

“I’m definitely a little tired but I feel pretty good,” Woods said in an interview afterward. “I haven’t been out here playing like this. I hadn’t played any holes until today. I know people have said I’ve played holes back at Medalist, but I haven’t. This is actually the first time I’ve played holes since Wyndham. It’s been awhile.

“I’m just progressing. You saw how I was going at it today, nice and smooth. That’s harder than I have been going at it the last month. Just gradually progressing. We’re just trying to progress and I’m doing that.”

So, what do we know about Tiger and his return? Next to nothing concretely. Reports have him eyeing comebacks in the next few weeks, but Woods is happy to string us along even longer by debunking them at every turn. There’s an epidemic of misinformation being spit out to the general public regarding Woods. For what reason is anyone’s guess.

What we do know for certain is that Woods played five holes at Bluejack National on Monday and he’s registered for the U.S. Open, as is every other player who has earned entry to this point.

Just like it’s been all year, we’ll continue to wait to hear something from Team Tiger on when the man in red will return.