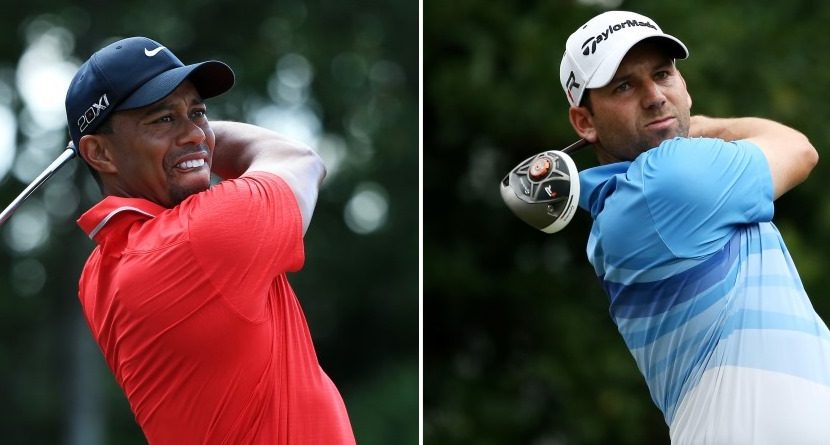 What was once entertaining, because verbal squabbles in golf are rarer than holes-in-one, has now taken a turn toward wrong and unacceptable.

At the European Tour awards dinner Tuesday night in England, Sergio Garcia was jokingly asked if he planned on meeting Tiger Woods for dinner during the U.S. Open next month. Garcia replied, “We’ll have him ’round every night. We will serve fried chicken.”

References to “fried chicken” are often associated with racial stereotypes of African-Americans.

Woods responded to his foe’s comments Wednesday morning via Twitter:

The comment that was made wasn’t silly. It was wrong, hurtful and clearly inappropriate…

I’m confident that there is real regret that the remark was made.

The Players ended nearly two weeks ago and it’s long past time to move on and talk about golf.

The latest drama began at THE PLAYERS Championship, when Tiger and Sergio played together in the third round. But that was just the latest in a long line of back-and-forth barbs.

The media kept the fire alive this week, asking Tiger during a press conference at the Congressional Country Club if he planned to repair his relationship with Sergio. Tiger’s quick response: “No.”

Then the European press got time with Sergio at a news conference Tuesday in England ahead of a European Tour event. Sergio vented again.

And he continued with Tuesday night’s controversial remarks. Sergio quickly issued an apology through the European Tour:

“I apologize for any offense that may have been caused by my comment on stage during the European Tour Players’ Awards dinner,” Garcia said. “I answered a question that was clearly made towards me as a joke with a silly remark, but in no way was the comment meant in a racist manner.”

Sergio met the media again Wednesday morning in England, saying “my answer was totally stupid and out of place. I feel sick about it.”

It’s been 16 years since Fuzzy Zoeller commented to reporters about the rising star that was Tiger Woods: “Tell him not to serve fried chicken next year (at the Masters champion’s dinner). Or collard greens, or whatever the hell they serve.”

Apparently some things haven’t changed. That is what’s totally stupid.