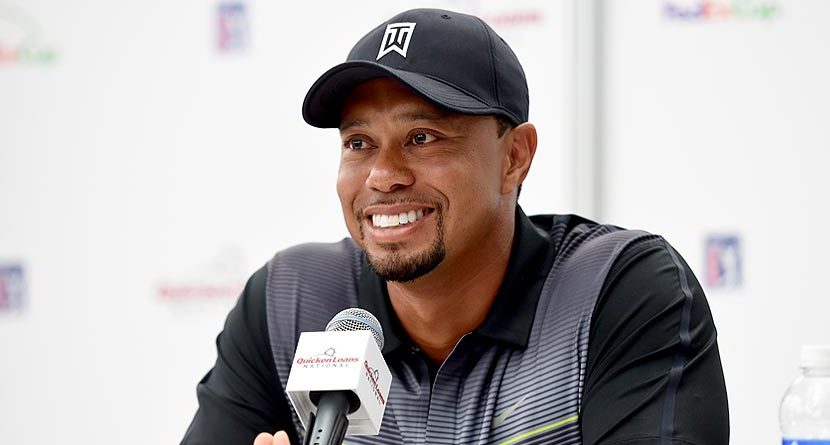 Tiger Woods will make his official return to competitive golf Thursday when he tees it up at the Hero World Challenge — an event hosted by Woods, himself.

On Tuesday, Woods held a press conference alongside Hero CEO Pawan Munjal where he discussed his swing, the path to recovery, and his new swing consultant Chris Como.

Below are the best quotes from Tuesday’s press conference: On beating Father Time
– “Father Time is undefeated. We all eventually are losing some of the things we are able to do when we were younger.”

On winning ‘at a late age’
– “You can win at a late age because you don’t have to dominate anyone. You just have to beat the golf course … I still have time.”

On going back to old roots
– “We looked at a lot of video from when I was a junior, in junior and amateur golf. And it was quite interesting to see where my swing was then and how much force I could generate with a very skinny frame. How did I do that? How do I generate that much power? That’s kind of what we are getting back into it.”

On finding a way to watch old tape
– “Actually, it’s pretty interesting trying to find a VHS recorder. I have a lot of tape like that. Fortunately, my mom is of age where she has that still in the house. So that was very beneficial to look at some of the old tapes.”

On his new swing
– “It is new, but it’s old. I say that because I haven’t done it in a very long time. I know my body feels excited about it, because it’s an old motor pattern that I know. And I’m able to generate speed and I have the range of motion and it’s interesting … I don’t feel like I’m hitting it very hard, but it’s coming off the face faster.”

On Chris Como fitting his plan
– “I had this plan in my head of where I wanted to go and what I want my swing to look like and what I want to get out of my body and out of my game. I just needed to align myself with a person that felt the same way. Chris fits that for sure.”

On his recovery
– “I’ve gotten stronger. I’ve gotten more explosive. I’ve gotten faster. I now just need to hit more balls. But the body is good. I don’t have the sharp pain like I used to at the beginning of the year. I don’t have that anymore. I still have some aches and pains, just like anybody else who is my age and older.”

On becoming stronger, playing soccer with his kids
– “I’m past the rehab portion of it, and now I’m in the strength development of it, and I don’t have to do those tedious little rehab exercises. I can basically play with my kids and do whatever I want. We’ve been playing a ton of soccer in the backyard just about every day.”

On moving the Hero World Challenge
– “We’re excited to announce that we’ve signed a deal with Albany in the Bahamas and we are going to move down there for the next three years.”