Tiger & Torrey: So Happy Together 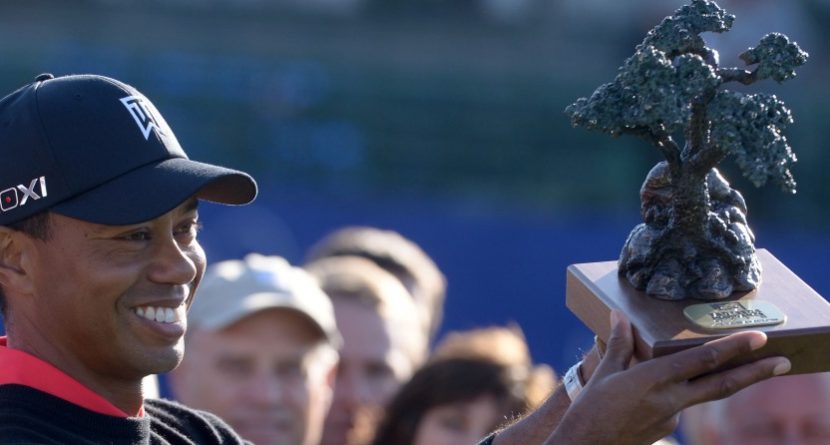 Tiger Woods tees off for the second time in 2015 at the Farmers Insurance Open at Torrey Pines, looking to bounce back from a tough week in Phoenix — and there’s no better place to him to do so.

Should he do what he did here in 2013, Woods would notch his 80th career PGA Tour victory. That would leave him just two short of tying the legendary Sam Snead for the most ever. That’s hard to fathom for even some of the game’s current elite:

Eight of Woods’ wins occurred at Torrey Pines – seven at the annual PGA Tour stop, and one at the 2008 U.S. Open, for a grand total of $6,845,096 won at this one course alone. Those eight victories are tied with himself for the most at one place (he’s also won eight at Bay Hill and Firestone), but if you want to count amateur wins, he’s triumphed 14 times at this course according to the PGA Tour:

“There’s something special about Torrey Pines,” Woods said following his victory last year. Here’s a look back at Tiger and Torrey:

2013 Farmers Insurance Open: Propelled by eagles in each of the first two rounds, Woods cruised to a four-shot win despite playing just even-par the final round. It marked the first of five PGA Tour wins in 2013.

2008 U.S. Open: Probably the most memorable of Woods’ wins at Torrey Pines, as he fended off Rocco Mediate for his 14th (and most recent) major. Woods played on a bum left knee that would require season-ending surgery just days later, but he bested Mediate on the first hole of a sudden-death playoff after the two had battled to a tie in an 18-hole playoff.

2008 Buick Invitational: That ’08 season for Woods began at Torrey Pines, where he crushed the field by eight strokes to take the Buick Invitational for the fourth straight year and by a record margin. Despite playing only six official PGA Tour events in 2008 due to injuries, Woods won four times (twice at Torrey Pines), placed second at the Masters, and earned more than $5.7 million.

2007 Buick Invitational: Woods’ final-round 66 was two shots better than Charles Howell III, and after he won his final six starts of the ’06 season, Woods secured his seventh consecutive win on the PGA Tour to begin 2007.

2006 Buick Invitational: Jose Maria Olazabal and Nathan Green made him work in his ’06 debut, but Woods still came out on top after two playoff holes. He birdied 18 to get into the playoff, and then two pars were good enough for the win.

2005 Buick Invitational: Tom Lehman roared out to a 15-under score through two rounds, but drifted back to the pack with a third-round 1-over 73. Woods lurked at just two shots back to start the final day, and secured a three-shot victory with a birdie at 18. The three guys who tied for second bogeyed 17 or 18 or both.

2003 Buick Invitational: Woods underwent knee surgery prior to the 2003 season, but his first event back was impressive. His first round was his worst with a 2-under 70, but he finished 16-under and four strokes ahead of Carl Pettersson.

1999 Buick Invitational: His first professional win at Torrey Pines was his greatest. You wouldn’t have suspected as much after Woods sat nine shots off the lead entering the weekend. But he exploded for a South Course record 10-under 62 on Saturday, and a 7-under 65 on Sunday to finish at 22-under – the best 72 holes ever for Woods at the course, and tied with only George Burns (1987) for the best performance of all time at Torrey Pines.

1991 Junior World Golf Championships: Tied after three rounds with Chris Riley, a San Diego native, Woods was the only player to break 70 in the final round. His 69 was three shots better than Riley, who finished second.