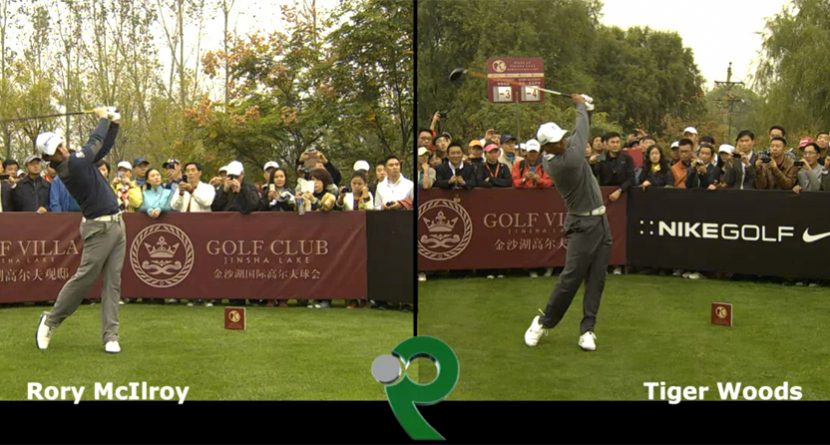 As we build up to The Match at Mission Hills between Tiger Woods and Rory McIlroy, let’s look back at some footage of the two from their duel last year at Jinsha Lake. We have a few different camera angles to view two of the greatest swings in golf.

Let’s start with the overhead video because it is a view that you rarely get to see. In the two driver swings for these two great players there are a lot of similarities right from the start. We will not ignore the fact that Tiger hit a big block right with this particular swing. If you are wondering how I know, go to the last few frames of the slow motion video and you will see Tiger take his right hand off the club just after finishing his swing. But that is not the only indication that this one got away from the world’s No. 1 player.

Everything starts out all right for Tiger. His takeaway, like Rory’s, is built for maximum power. Pay particular attention to the width of the backswing. The distance both players put between their bodies and their hands on the way back is amazing. The greater this width, the more power a player can generate. From there, both players’ bodies continue to rotate behind the ball. When the club reaches the top of the backswing, the left shoulder for both players is loaded behind the ball.

However, if you pause both swings at the top, two things become immediately apparent. The first is that Rory’s club face is square, while Tiger’s is more open than perhaps he would have liked on this particular swing. The other is that Rory has loaded his right side more than Tiger, who tends to have less lateral motion in his golf swing than a lot of players.

If you pay extra close attention as Rory and Tiger both start the downswing, Rory reroutes the club ever so slightly under his original rotation while Tiger’s downswing starts on the same path from which it started — at least from this angle, but there are things at work here that can’t be seen from this view. What can be seen is that as both players move down and through the ball, the left arm stays extended, pulling hard, creating power and club-head speed. At impact, Rory’s hips have rotated nearly to the target line. Tiger’s are slightly later for a couple of reasons. The first is that somewhere in Tiger’s muscle memory, he knew that the club face was slightly open at the top, and from that point on he has been trying to save the shot with his rotation and his hands. Just after impact, when his hands reemerge in the image, you can see how violently Tiger has tried to rotate his hands and, thusly, the club face back to square. He nearly pulled it off but it is clear from his reaction that this swing was not his best.

Rory, by contrast, fully releases his hips, shoulders and hands in beautiful sequence, ripping a drive that undoubtedly traveled over 300 yards on a string.

Now, let’s take a look at the front-line look of both players. To start, these swings are not the same swings we saw in the overhead view. Tiger’s rotation in this swing is complete and the result was a much better drive. Rory’s swing remains consistent, but from this view we can see a few other things that we couldn’t see from overhead. This swing sequence starts from the top of the golf swing, where we immediately notice that both players are in a very athletic position with flexed knees building power from the ground up. Notice in slow motion that the very first thing that moves forward on Rory’s swing is his left hip, while Tiger’s downswing fires with the club and hips moving together. Remember that this is a comparison of a player who is 5-foot-9-inches and a player who is 6-1. Rory has less space in which to generate his immense power, while Tiger has power in reserve on  most swings.

Rory’s hip rotation is fascinating, and this is a great angle to see that at impact his hips have fully rotated to the target before the club reaches the ball. As a matter of fact, and don’t try this at home, for just a millisecond after impact Rory’s hips rotate back toward the tee before the arms and club catch up and bring everything through to the finish. Although you can’t see it in the Tiger video, there is an element of this reverse rotation in his hard swings as well. The reason is that as the hips lead the downswing, rotating at maximum speed, there comes a point when they can rotate no more without the rest of the body catching up, and it is moving quickly. One final thing to note is the finish position. Both players’ shoulders rotate well past the target line by nearly 90 degrees. This is the finishing element of the modern golf swing.

Overall with both players, what you are seeing is a coiled spring unleashing through the golf ball at incredible velocity. The fact that both of these players are able to generate this much club-head speed while maintaining balance and rhythm is incredible. These are truly great athletes.

John Maginnes played on the PGA Tour from 1996 to 2005 and very few people noticed. Since 2004, John has been a broadcaster and writer for a variety of different outlets. Currently, John hosts Maginnes on Tap weekday evenings on SiriusXM PGA Tour Radio. He also contributes to the live coverage of PGA Tour events. Most recently he has become a contributor to Back9Network and brings his knowledge of the game, his wit and his pension for 19th holes to our members.