Tiger vs. Rory:~Real or Imagined? 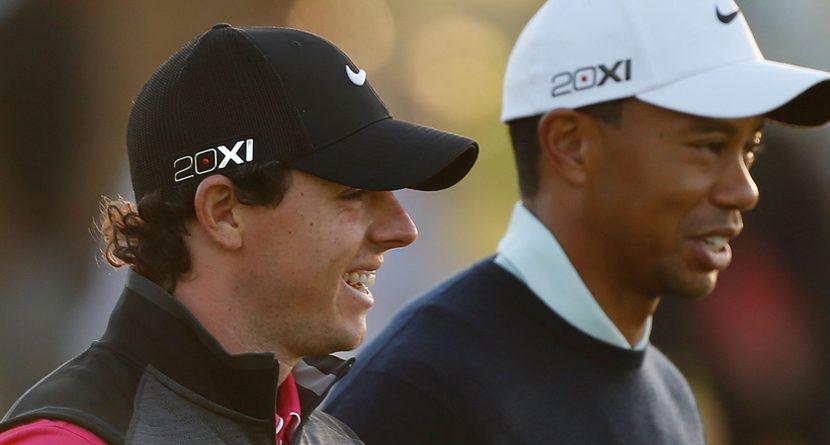 By now, the odds of you having seen the commercial are high.

At some stage in the past fortnight, its 60-second burst of day-glo, corporate-approved bro-banter has almost certainly fouled a glowing screen somewhere in your vicinity, perhaps two simultaneously (“multi-screening” being our way of life now, and no longer the lonely pastime of “Star Trek” extras and IT workers).

YouTube views alone are tipping towards the 10 million mark – not enough to put it in the same league as Gangnam Style, or even Antoine Dodson, but enough to win a viral marketing gold medal and key to the executive bathroom for the enterprising Nike employee who first saw in Rory McIlroy the public rehabilitation of Tiger Woods.

It’s called “No Cup Is Safe,” and begins with our protagonists, the aforementioned world No. 1 and Greatest Golfer of All-Time™, clipping balls into the verdant bowl of a country club driving range. On the far side of the amphitheater,  set against cliff face and mature hedgerow, nestle a number of villas, split-level palaces of the sort that ring Tour stops and major venues. All is still, save for the sound of golf balls being propelled into the void.

Click. Rory sends a pitch arcing against the backdrop.

Thump. Tiger heaves a mid-iron into the distance.

Yet reality this is not. The oleaginous sheen of computer-enhancement clings to everything; there’s a total absence of ambient noise; again, that otherworldly stillness: this is hyper-real. We’re a hop, skip and jump shy of full-blown, green-screen illusion. Something’s up.

Quite what that something is becomes clear seconds later as the narrative sputters into action, freeing Woods and McIlroy – the scamps! – to exchange sarcastic barbs and commence an arms race of sorts fuelled by ever more outlandish feats of daring-do. But their lines are dead, each numb wisecrack delivered with the exaggerated good nature of a children’s television presenter. This is no conversation between adults. In fact, this is no conversation at all. Camera jiggery-pokery and directorial legerdemain may imply otherwise, but this is a case of two monologuing marketing entities set in awkward counterpoint. Their spots were filmed separately, it turns out; a full day apart.

It’s difficult to conceive of a more fitting metaphor for the relationship of Woods and McIlroy, that bromantic axis on which Nike has staked hundreds of millions of dollars, than “No Cup Is Safe”. They have, it has been insinuated, even insisted to us, grown closer these past months, played the comedy double act abroad, nudged and winked their way through tournaments and media obligations. One senses, however, that their points of contact are few and far between, suspects their rapport is built on foundations no more solid than shrewd strategizing and industry hype. Like those crisp, HD avatars chirping away on the range, it requires expert intervention to place them in the same time zone, let alone side by side.

Still, having debuted to near-universal acclaim and mushrooming exposure, “No Cup Is Safe” and the campaign it’s spearheading will no doubt be judged great successes. Those floating voters of the golf industry, the kind of people who are cajoled into one camp or the other by force of ad campaign or high-profile endorsement, will no doubt join queues in the unconscious hope of securing a new Nike driver, and with it the approval of those pranksters on the range.

That, I suppose, is the nature of sales. Marketing departments will weave narratives from thin air; well-worn personalities will be employed to seduce Joe Public. Irritating, however, is the way in which we – fans and media types alike – have given ourselves over to it, ceded by increments our right to know, our claim to a truth (or version of it) that isn’t strained through a cloud of agents and handlers experts en route to our web browsers and TV screens.

The hysteria, the sheer giddiness that greeted the release of that cut-and-paste advert can be traced to the arid media centre, where sports hacks and producers subsist on the merest scraps of honesty and insight from players so coached as to verge on the opaque. It’s a climate in which flickers of personality from those at the high table, no matter how strained or insincere, are seized upon with abandon and more than a little relief.

In nearly any other arena, Nike’s narrative would look vaguely absurd; in golf, where the biggest stars sit as remote as those in the night sky, it’s just par for the course.