Tiger vs. Sergio: Brewing Through History 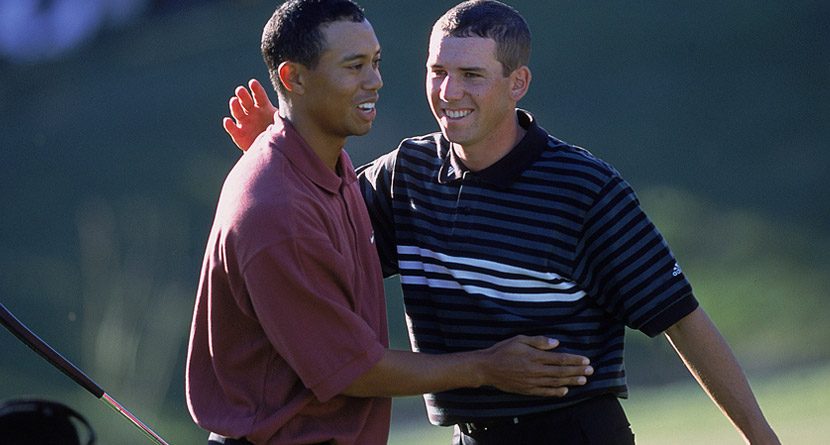 The catty war of words at The Players Championship this past weekend is just the latest chapter in the 14-year saga between world No. 1 Tiger Woods and Sergio Garcia.

We take a look back at their history together.

Aug. 15, 1999: Woods, seeking his second major championship, is introduced to Garcia, dubbed “El Nino” (perhaps after the meteorological pattern in the U.S. the year prior), at Medinah No. 3 in the PGA Championship.

Garcia, 19 at the time, took the first-round lead with a 66 that had him four clear of Woods. Woods eventually took a share of the lead into the final round, but Garcia was the one who put a spook into the 23-year-old Woods.

The Spaniard hit perhaps the greatest recovery shot in major-championship history, turning his head and closing his eyes as he struck a ball seeming blocked by an enormous tree at the 16th hole.

Woods hung on for the Wanamaker trophy, while Garcia has never managed to break through.

Aug. 28, 2000: While Tiger has never been particularly friendly to his competition, the made-for-TV “Battle at Bighorn” is where his view of Garcia soured irreparably. The two competed against each other in an 18-hole match aired on ABC, with the last four holes played under the lights at the California course.

A tight match all the way through, Garcia seized the lead with a birdie at the 16th hole, which he would not relinquish. When he had won, Garcia celebrated the victory like he had won a major. Woods was put off by the display — after all, it was primarily for charity.

June 14, 2002: The U.S. Open had finally made its way to a public course, at the Black Course at Bethpage State Park on Long Island. Garcia, however, made a public display about weather conditions in the second round that was aimed at Woods.

Woods had the late-early draw, able to shoot 3-under 67 on Day 1, followed up by a tidy morning 68 on Friday. After Woods finished, the weather deteriorated, leaving half of the field to keep playing with heavy rain.

“I certainly did [think play should’ve been stopped,” he said. “And I don’t know if Tiger Woods had been out there, I think it would have been called. But there was a moment when not even the squeegees or whatever you wanted to put out there was going to help. And I really felt like it probably should have taken 40- or 45-minute break, but, you know, I hung in there and they got the round going.”

That didn’t help his reputation with the boisterous Long Island fans. Neither did his incessant re-gripping of the club before each shot, which netted him a large audience of hecklers that got under his skin even more than the weather.

Woods won by three shots over Phil Mickelson. Garcia, who entered the final round trailing Woods by four, closed with 4-over 74 to finish six back of the champion.

Tiger Woods was at the top of his game, having beaten Chris DiMarco in a Masters for the ages. Garcia actually threw Tiger a bone ahead of the tournament, naming him favorite, in personal absentia, of course.

“It’s a tough pick,” Garcia said. “I don’t know, I guess probably somebody like I want to say somebody like maybe Tiger because he’s really good around the greens.”

July 23, 2006: The pair seemed destined for another showdown in the final round of the ’06 Open Championship at Royal Liverpool.

Woods, who didn’t need a driver to get around the burnt-out layout, entered Sunday with a one-stroke lead over Garcia at 13 under par. Unlike Medinah seven years prior, however, this battle was not very competitive. Two months after his father Earl died, Woods closed with 5-under 67 to win by two shots over Chris DiMarco. Garcia, clad in an all-yellow outfit for the final round, shot 1-over 73 to close.

The legend goes that Woods texted a friend after his victory to say, “I just bludgeoned Tweety Bird.”

May 11, 2008: Even in Sergio’s proudest moment, he couldn’t avoid mentioning Tiger.

After he defeated Paul Goydos in a playoff for The Players, Garcia began his remarks at the trophy presentation by joking, “First of all, I want to thank Tiger for not being here.”

Woods was out with a leg injury that turned out to require season-ending surgery — after he won the U.S. Open on one foot.

Sergio would not win on the PGA Tour for another four-plus years.

Paired together in the final group in the third round of The Players, Garcia was hitting his second shot into the par-5 second hole when Woods drew a distracting crowd reaction across the hole as he pulled a fairway wood to go for the green from the pine straw. Garcia flared his shot well right, leading to bogey.

After play was called for the day, Garcia called out Woods for the gamesmanship.

“I wouldn’t say that he didn’t see that I was ready, but you do have a feel when the other guy is going to hit and right as I was in the top of the backswing, I think he must have pulled like a five-wood or a three-wood and obviously everybody started screaming,” Garcia told NBC during the delay. “So that didn’t help very much. But it was unfortunate because — I mean I might have hit it there if nothing happens, you never know – but if I hit a good shot there and maybe make birdie, it gets my day started in a bit of a different way.”

Woods, made aware of what the Spaniard said, replied with, “I heard his comments afterwards, and it’s not real surprising that he’s complaining about something.”

Nearly two weeks later at a European Tour awards dinner in England, Garcia was jokingly asked if he planned on meeting Woods for dinner during the U.S. Open. Garcia replied, “We’ll have him ’round every night. We will serve fried chicken.”

That racially-charged comment opened a whole new can of worms, but Garcia quickly apologized and did what he could to end the spat. Woods accepted the apology and the two shook hands upon seeing each other on the driving range at the U.S. Open.