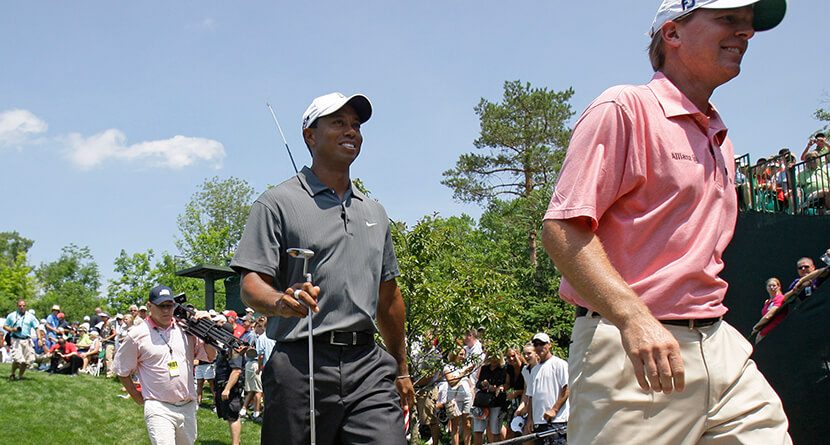 Tiger Woods permeates the game of golf at a professional and amateur level alike in distinct and unique ways even as he watches this week’s U.S. Open from his couch in Florida. The 14-time major champion is responsible for a boom in the game’s popularity rarely seen before in history; he’s credited for at least some of the money boom the PGA Tour saw in the early part of the century; and none of that is mentioning the sheer talent and undeterrable will be brought to the course.

We often hear about the positive impact Woods brought to the game, but hardly ever do we hear how Woods nearly chased players from the sport. And it was by no fault of his own.

Pro Golfer @SteveStricker reflects on the highs and lows of his @PGATOUR career (via @AmFam) https://t.co/ti9OiyKwgO pic.twitter.com/cfx05dxtpO


Steve Stricker penned an article for Derek Jeter’s The Player’s Tribune in which the semi-retired 49 year old wrote about how playing with Tiger Woods nearly derailed his career.

On the Wednesday before the 1997 AT&T Pebble Beach National Pro-Am began, I found out that in addition to being paired with Kevin Costner and Bryant Gumbel, I was going to be paired with a skinny 22-year-old who was rapidly changing the landscape of golf — both on and off the course.

That kid was Tiger Woods.

Several times, I would really connect with a drive only to be stunned to see that Tiger’s ball had landed 40 to 50 yards beyond mine.

This was the first big blow to my confidence as a golfer.

My round with Tiger made me introspective, and for the first time I began to doubt myself. All the early mornings on the range hitting balls until my hands were torn with calluses; all the hours spent practicing during the frigid Wisconsin winters; all the memories I had of being on the course with my father; in my mind, at that moment, it truly seemed as though all of the time and effort I had put into the game of golf had been rendered utterly meaningless.

The entire piece is an interesting read and worth your time, but what’s fascinating to think about is how many people did Tiger unintentionally run out of the game? Carson Daly, the successful television host, played junior golf with Woods and tells a story in which he rationalized to himself that he’d never be as good as Tiger and went down a different career path.

The realization by Stricker is one that all golfers can learn from. You may not be able to hit the ball like Tiger Woods or Rory McIlroy or Jordan Spieth, and that’s okay. Play your game and get the most out of what you have. After all, your swing is the only thing you can control on the golf course, if you can even control that.