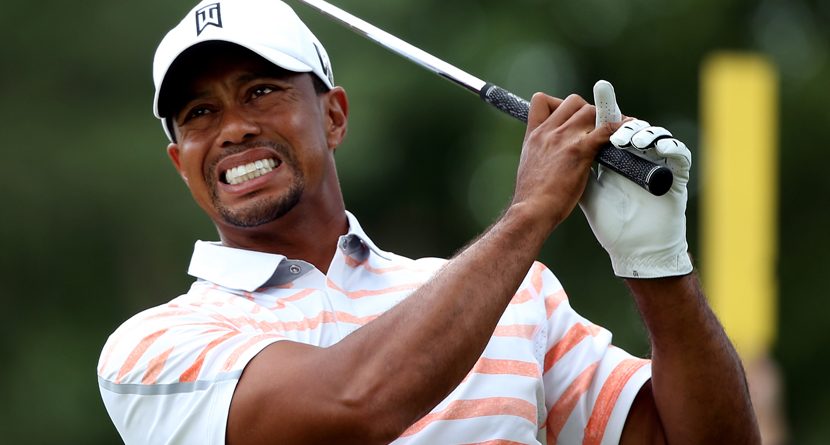 Tiger Woods is no stranger to injuries, as we’ve seen during his career.

His latest setback is an apparent left elbow ailment that first started bothering him at the Players Championship last month. During Thursday’s first round at the U.S. Open, Woods grimaced when he hit a shot from the rough on the first hole.

It was originally thought to be a left wrist problem, but Woods later disclosed that he hurt the elbow “playing golf” at the Players.

The world’s No. 1 player is not saying much more about the injury, and we assume he won’t.

2002: Woods missed the first five events of the 2003 season after undergoing left knee surgery late in 2002 to remove fluid from around his ACL.

2007: Woods tore his left ACL on a run and had surgery to repair the damage.

2008: After the Masters Tournament, Woods had left knee surgery to repair damage from years of swinging the golf club. His way of “snapping” the knee upon impact was pointed to as the cause.

Two months later during the U.S. Open, the same knee was giving Woods a lot of trouble. He was limping around the course and as the tournament went on, he grimaced after every shot. He competed in an 18-hole Monday playoff with Rocco Mediate and won. After the tournament, Woods went back under the knife to have the damage, which also included a stress fracture of the left tibia, repaired. He missed eight months of competition.

2010: Back and neck issues, which Woods called “a bulging disc,” led to his withdrawal from the Players Championship.

2011: During the Masters, Woods again injured his troublesome left knee.

A month later at the Players Championship, problems with his left knee and his Achilles led to his withdrawal from the tournament. He was sidelined for four months.

2012: The left knee issues came back again, this time at the WGC-Cadillac Championship. He was forced to withdraw from the tournament during the final round.

2013: After wincing following several shots during the first round at the U.S. Open, Woods disclosed that he injured his left elbow at the Players Championship.

Related Link: What Happens During A Rain Delay?