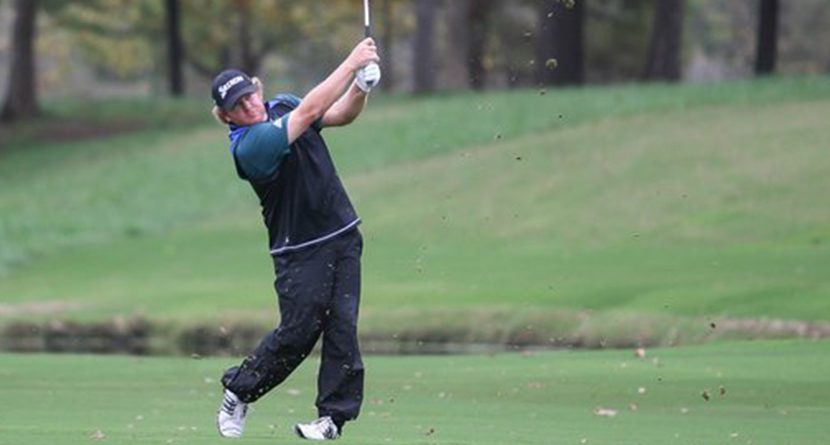 Everyone loves a good Tiger Woods story and William McGirt has one.

Speaking from the broadcast booth on Golf Channel following a final-round 68 at the Sanderson Farms Championship on Monday, McGirt relayed to the television audience that he was a scoreboard watcher, a relatively recent change for him and one that was prompted by an impromptu advice session with Woods at the 2012 PGA Championship.

Two weeks after finishing in a tie for second at the 2012 RBC Canadian Open, McGirt was rehashing his recent strategy while in contention with Woods’ caddie, Joe Lacava.

“I was telling the story on the putting green at the PGA at Kiawah that year and I told Joe LaCava that I had never looked at a leaderboard on the back nine and that it was my only regret,” McGirt said, as relayed by Golf Blot. “Tiger was hitting putts. He looked straight up and he said, ‘What?’

“He walks over and we’re basically nose to nose, and he says, ‘OK, spill the beans.’

“I told him it was my first time in that situation on Tour and that I didn’t really want to screw it up by looking at leaderboards. So, we had a nice little conversation, and he goes, ‘You’re an idiot,’ and I said, ‘I know, thanks.’

“I took that (advice) and kind of learned from it. The few times I have been in position since then, I’ve stared the leaderboards down. I want to know what I have to do.”

Woods, a notorious scoreboard watcher, can’t grasp the concept of keeping one’s head down and hoping for the best. Instead, he has always preferred to check the leaderboard to see exactly where he stands.

“I have never understood that concept (of not looking at leaderboards),” Woods said at the 2006 Ford Championship at Doral. “Because that dictates what you do.”