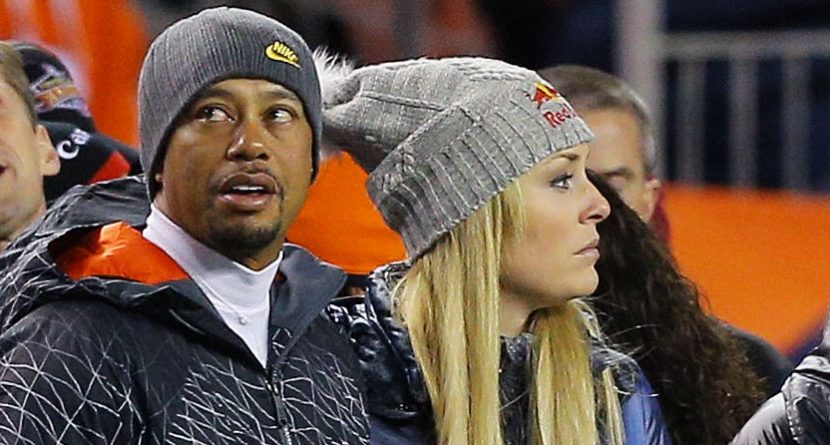 The golf world – OK, the entire sports world – remains curious to know if world No. 1 Tiger Woods will slip into his parka, brave the chilly weather and cheer on girlfriend Lindsey Vonn at the Sochi Olympics in February. The greatest American skier ever plans to be defending her Olympic downhill title and winning a few other medals.

Yet, Woods remains hesitant, and now the primary reason is because it’s still not 100 percent clear if Vonn will even be there. She torn an ACL and MCL in a crash last February, and re-injured the same right knee a few weeks ago in another crash.

“It’s day to day,” Woods said about his plans to attend the Games. “We just don’t know how her leg is going to be.”

All indications are positive as of now. Vonn took official downhill training runs this week at the World Cup stop in Lake Louise, Canada, and announced Thursday that she’ll race for real on Friday for the first time in 10 months. Her downhill training time Wednesday was 22nd among 65 skiers.

“Knee feels good. Feels stable,” Vonn said. “And, you know, just going to play it by ear (Thursday) and make a decision on the race.”

Besides, the first two events during the Feb. 6-23 span are the AT&T Pebble Beach National Pro-Am and the Northern Trust Open – two events Woods rarely plays. The biggest conflict would be with the WGC-Accenture Match Play Championship from Feb. 19-23, which is a big-money event at which he’s been a regular.

But according to Nick Zaccardi of NBCSports.com, Vonn’s events figure to be on Feb. 10, 12, 15 and 18. Woods could be in attendance for the first three, and miss the last one to get back home for the Match Play. All he’d miss is Vonn in the giant slalom, an event in which she’s never won an Olympic or World Championships medal.