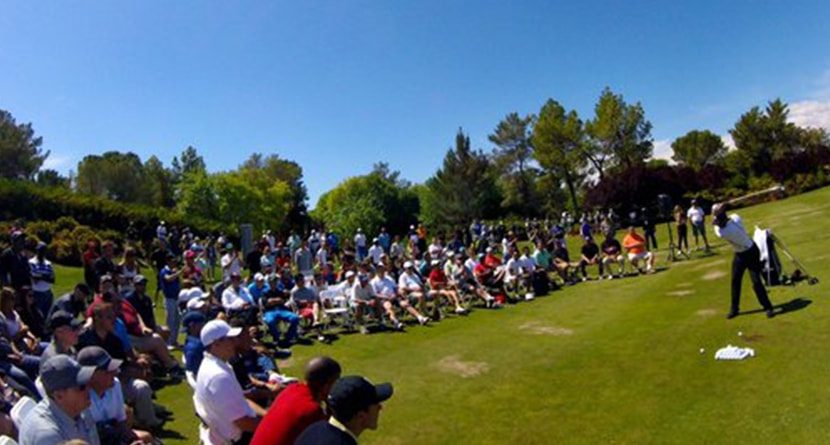 @TigerWoods is back in action at Shadow Creek today. An unforgettable moment for #TigerJam VIPs! pic.twitter.com/ljRypjnL4g

Tiger Woods is in Las Vegas this weekend putting on his annual “Tiger Jam” event benefitting the Tiger Woods Foundation. On Friday, Woods put on a short 30-minute clinic, perpetuating the belief that his return to the PGA Tour was imminent.

Despite reports that next week’s Wells Fargo was prepping for Woods’ return, the 5 p.m. deadline for entry came and went without Woods committing the the event.

No surprise, Tiger is not in the field at Quail Hollow next week. But Jim Furyk is. And so is Rory and Phil

During a Q&A portion of the clinic, Woods was naturally asked when he would be returning to competition. With his foundation Periscoping the event, Woods responded “Dude, if I knew, I would tell you. I’m sick of being on the sidelines. I want to compete against these boys. I miss it.”

“I want to start competing against these boys – I miss it.” -Tiger Woods at the #TigerJam exhibition

Sticking to the “no timetable” company line, Woods inclusion in the Players Championship in two weeks will be the next scrutinized possible start. He’s also registered for June’s U.S. Open at Oakmont, but there is no guarantee he will play that either.

Here are some other posts from the event’s Friday in Vegas:

The chips are stacked and #TigerJam’s Poker Night presented by @WPT is about to begin! pic.twitter.com/xVw2YtIeGr

With @TigerWoods nearing the final table, the crowd is growing…#TigerJam pic.twitter.com/9APDLT07e3