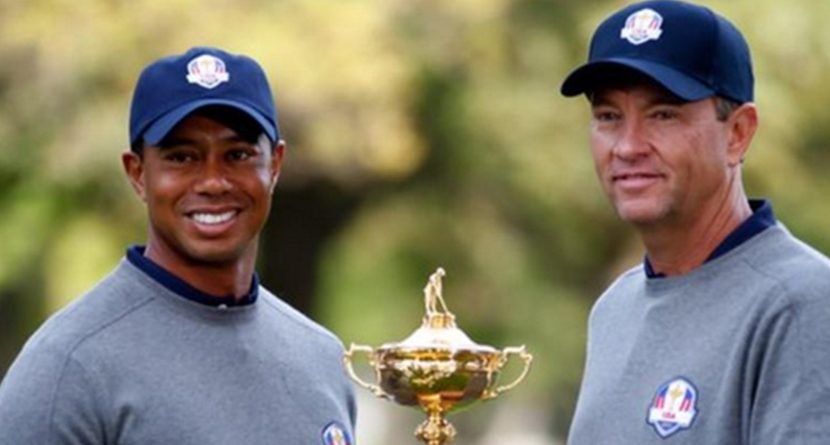 More than 315 days before the first ball was to be struck at the 2016 Ryder Cup, Tiger Woods already guaranteed his presence at Hazeltine National Golf Club. In a “significant” Ryder Cup announcement on Wednesday at the RSM Classic at Sea Island Golf Club, US captain Davis Love III named Woods, Jim Furyk and Steve Stricker vice captains for the biennial event.

Excited to join @Love3D, the other VCs & @RyderCupUSA as a Vice Captain, and help #TeamUSA get a victory in 2016: https://t.co/p5wzvoyOYI

Stricker was a natural fit and the personification of the Ryder Cup task force’s captain succession vision — the 2020 event is being contested at Whistling Straits in Stricker’s home state of Wisconsin. But for Furyk and Woods, players who at face value stand a strong chance of making the squad either by performance or selection, the appointments make you scratch your head.

Currently, Furyk sits at 10th in the US standings and he has been a member of the US squad for every iteration of the Ryder Cup dating back to 1997. His passion for the event and desire to win have never come into question despite his dismal 10-20-4 record, as evidenced by his memorable quip following the 2014 loss at Gleneagles.

Woods, on the other hand, doesn’t receive the benefit of the doubt when it comes to his respect, desire or passion for the Cup. Perhaps that is a result of the straw man argument waged against his record in the competition or the belief that his major obsession rendered his passion bucket empty when it came to team events. How ever it has been rationalized by detractors, Woods has proven over the last two years that he does indeed care about the event and he is willing to do whatever he can to help the United States going forward.

A founding member of the task force that was assembled following the US defeat in 2014, Woods has been immersed in the dedication of the American side to reclaim the Cup. Furthermore, a different version of Tiger Woods has emerged in recent years, one that yearns to be involved and included.

It’s no secret that the last two years have not been kind to Woods. He has had more back surgeries than top-10 finishes on the PGA Tour since the end of 2013. The advertisers and tournament organizers who came back to the 14-time major champion following his scandal have since moved on, opting to spread out the $2-3 million in appearance fees previously reserved for Woods to a younger and wider sect of stars.

And while it may be hard to feel sorry for Woods, it’s not difficult to empathize with his current situation: broken down physically, beaten up mentally and grasping at anything that resembles his former life. That’s how one gets to sitting on a couch at 5:30 in the morning, texting his peers in a foreign country to discuss an event that is more than a year away (which Woods did during the President Cup).

Woods just wants to be involved, included. That’s why he’s agreed to be a vice captain before turning 40. That’s why he was willing to drop his usual schtick about wanting to be involved only if he played his way on to the team. That’s why Woods’ passion and desire for the Ryder Cup have seemingly elevated.

While Woods’ recent struggles are detrimental to his golf game, his inclusion in the Ryder Cup festivities — even as a vice captain in a cart with a walkie-talkie — is a good thing for the American team going forward and his own peace of mind.