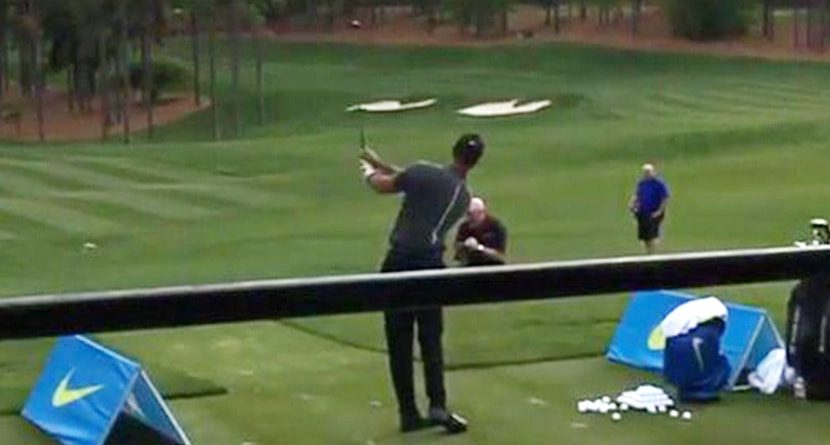 Tiger is definitely back! His swing is looking flush. Only matter of time he will be back. Last night — ‘I miss kicking everyones asses.’ – @TigerWoods Tiger is such a awesome guy, spent time with us, played pingpong and basketball… He will be joining us on the first tee in a few hours! Follow me on snapchat – @mlee.27 for more snapchats of him and the tournament I’m at. #NikeGolf #SageValley @golfchannel @golfdigest @nikegolf

It looks like the reports that Tiger Woods is progressing, hitting every club in the bag and practicing four-to-five hours a day were true.

Woods showed up at the Sage Valley Junior Invitational yesterday to give the participants a 45-minute clinic in which he went through his bag hitting everything from a sand wedge to a driver. He even pulled out his patented 2-iron stinger.

Tiger looks closer than ever to being back in action.

#TigerWoods is currently putting on a clinic at #JrInviteSage ……… #STP pic.twitter.com/2QX3rf1LJG

@tigerwoods carrying the driver 300. I’m not saying he’s back, but… pic.twitter.com/b4BeI7hTuN

[h.t SBNation.com for some of the videos]