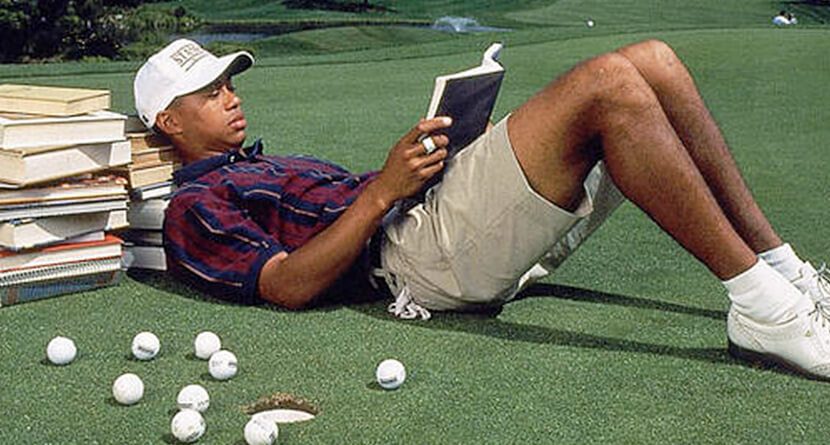 While Tiger has been slowly rehabbing his aching back into playing shape, it appears he’s been spending at least some of his downtime away from the video game controller and working on a book.

My 97 Masters win was one of the most important events in my life, can’t wait to share those stories with you. https://t.co/sy3QenhSLg

In a statement posted on his website, Woods announced he would co-author a book about his win at the 1997 Masters to be released for the 20-year anniversary of the event in 2017. Canadian golf journalist and author Lorne Rubentein — the same man who scored the sit-down with Woods for TIME Magazine last year — will be the co-author.

The book sounds great; they just need to work on the title. UNTITLED TIGER WOODS 1997 MASTERS BOOK doesn’t exactly roll off of the tongue.

Grand Central Publishing (GCP), a division of Hachette Book Group, is thrilled to announce the acquisition of UNTITLED TIGER WOODS 1997 MASTERS BOOK by sports icon Tiger Woods, co-written with Lorne Rubenstein. Jamie Raab, president and publisher at GCP, negotiated world rights to the book with Mark Steinberg of Excel Sports Management, with Gretchen Young, VP, Executive Editor at GCP editing. The book will be published in hardcover, e-book and audio editions in March 2017 in conjunction with the 20th anniversary of Tiger’s win at the 1997 Masters.

Tiger, then only 21, won the 1997 Masters by a historic 12 shots, which remains the widest margin of victory in the tournament’s history, making it arguably among the most seminal events in golf. In UNTITLED TIGER WOODS 1997 MASTERS BOOK, Woods will recount, in his own words, his experience of winning his first major, becoming the youngest Masters champion ever. The 1997 Masters was Tiger’s first appearance in the tournament as a professional; he had turned pro only the previous August. Tiger was already among the most-watched and closely examined athletes in history. He was the first African-American/Asian player to win the Masters, and this at the Augusta National Golf Club, perhaps the most exclusive club in the world, and one that had in 1990 admitted its first black member. His utter domination of the field after shooting a 4-over-par 40 on the front nine of the first round, and then recovering with a 6-under-par 30 on the back nine, captivated and astonished the golf world and beyond. Tiger has called it the defining tournament of his career, having won 13 more major championships since.

The book, Woods’ first since his 2001 book, “How I Play Golf,” will explore Woods’ history with the game, the tournament itself, how golf has changed over the last 20 years and what it was like winning. Woods will open up about his relationship with father Earl Woods, dispel previous misconceptions and will candidly reveal many more stories that have never been told before.

“The 1997 Masters was one of the most important tournaments in my life for many reasons,” Tiger said. “I think about the hug with my dad and all the events that went on that week. A lot of people know generally about that tournament, but this gives me a chance to tell in detail what happened on and off the course.”

“It is a great privilege to help bring to light this vivid account by the legendary Tiger Woods of his barrier-breaking win at the 1997 Masters Tournament,” Young said of the acquisition. “For the first time he shares with readers the personal, professional and societal challenges he experienced in reaching and winning the tournament, providing keen insight from one of the game’s all-time greats on the Masters then and now, as well as on the sport itself.”