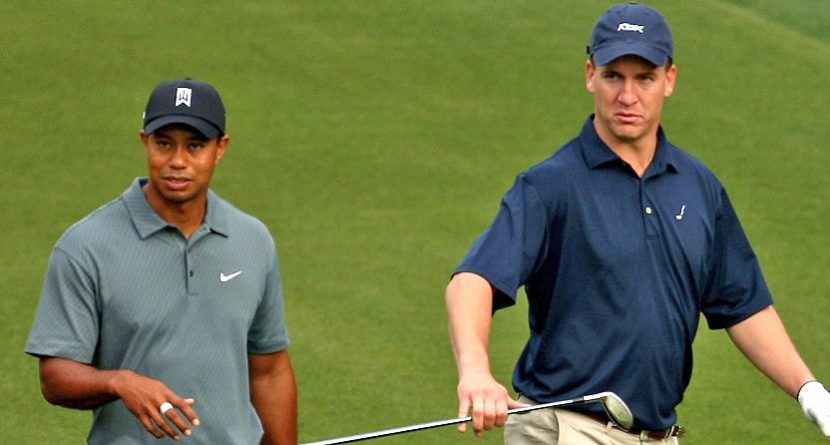 Tiger Woods probably won’t get to watch much of the Super Bowl this Sunday. He’ll be competing at the Dubai Desert Classic, which is nine hours ahead of Eastern Standard Time. That means kickoff between the Seattle Seahawks and Denver Broncos would be 3:25 a.m. in Dubai.

But Woods knows who he’ll cheer for: the Broncos and Peyton Manning.

“I like the Broncos,” Woods said Wednesday at a press conference in advance of the Desert Classic. “I’m good friends with Peyton. Peyton is one of my good buddies and let’s be honest, he got scrutinized pretty hard when he left (Indianapolis) that he would never be the same after his neck surgery. And it’s right, he’s not the same, he’s better. And that’s cool to see.

“That’s cool to see the hard work that he put in to shut everybody up.”

Woods and Manning have played golf together on a handful of occasions, both publicly – like at the 2009 Quail Hollow Championship pro-am and 2005 Bay Hill Invitational pro-am – and privately. The two have also shared corporate sponsors.

Another factor influencing Woods’ Super Bowl choice is his girlfriend, Lindsey Vonn, who has been based in Colorado for years and calls the Broncos her favorite team. Woods and Vonn caught a Broncos game in person back in November, watching Manning lead Denver to a victory over the Chiefs.

Some might question Woods’ pick because he grew up near Los Angeles as a Raiders fan, and he says his first Super Bowl memory was the Raiders winning Super Bowl XVIII over Washington Redskins in 1984. The Broncos and Raiders are AFC West division rivals, but the Raiders haven’t had a winning season since 2002, when they lost Super Bowl XXXVII.