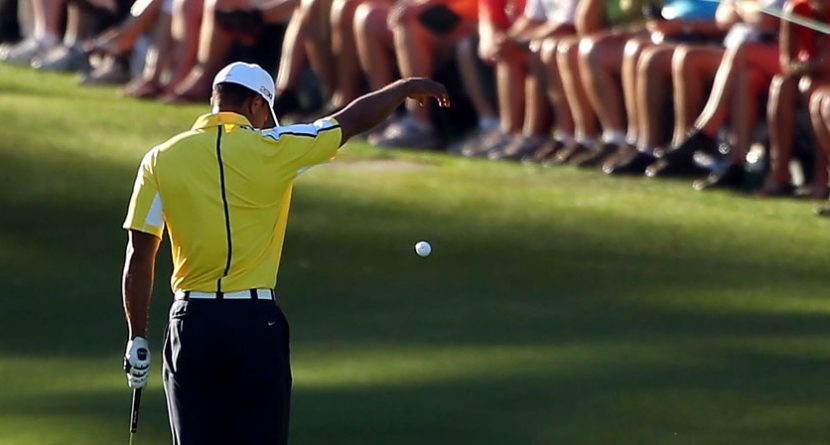 Tiger Woods will get to play the final two rounds at the Masters, but he’ll start Saturday play five shots behind the lead of Jason Day, not three.

Woods was retroactively penalized two strokes by the Masters rule committee for taking an improper drop at the par-5 15th hole on Friday.

After hitting his third shot on No. 15, Woods’ ball struck the flagstick and went backward into the water hazard. To take relief after a one-stroke penalty, Woods had three options, but chose to play from the original spot.

Under Rule 26-1 in the Rules of Golf, Woods had to drop “as close as possible” to where he struck his third shot. He admittedly dropped two yards behind that spot. Therefore, he was ruled to have taken an improper drop and assessed an additional two-stroke penalty.

Since he did not account for the improper drop penalty in his final Friday score, Woods could have been disqualified under the Rules of Golf for signing an incorrect scorecard. However, under Rule 33-7, “A penalty of disqualification may in exceptional individual cases be waived, modified or imposed if the Committee considers such action warranted.”

Specifically, the U.S. Golf Association and R&A, the game’s rulemaking bodies, made a Decision under this rule in 2011 which says a player can avoid disqualification if a player is unaware and could not be aware of a rules violation without modern technology, such as video.

That’s what Augusta chose to do in this situation.

Woods is now 1 under par through 36 holes, five shots behind Jason Day.