Tiger Woods on NBC: ‘I’m Far From Being Done’ 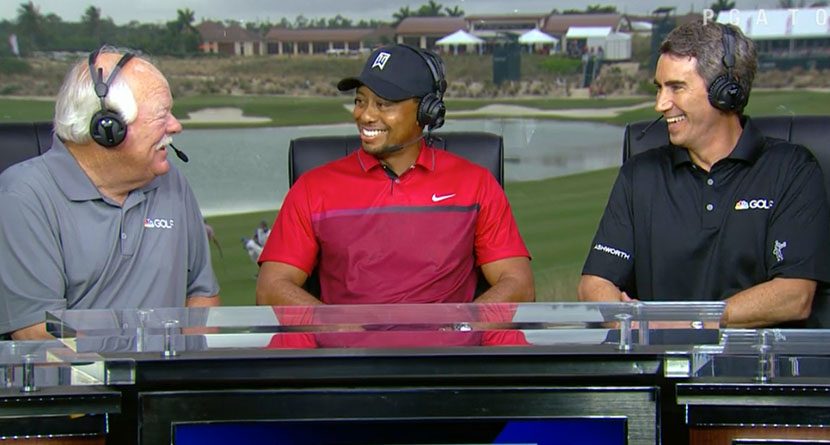 Tiger Woods joined NBC’s Terry Gannon and Roger Maltbie in the broadcast booth during Sunday’s final-round coverage of the Hero World Challenge at Albany Golf Club in the Bahamas. Wearing his tried and true Sunday red, Woods dished primarily with Maltbie about the content and context of his interviews from the past week, which included a dour press conference on Tuesday and an insightful Q&A in Time Magazine that was published on Wednesday.

Among the highlights from the short visit was Woods explaining the yet-to-begin rehab process of his latest injury and unequivocally saying that he’s not done trying to compete on the PGA Tour.

“The difference is that the health is different than what it used to be,” Woods said. “The spring back from a joint — having all the many surgeries that I’ve had over the years — is so different than having a nerve (problem). That’s probably the recognition I think you’re seeing is that I understand that this is very different.

“Does that mean I’m not going to rehab, I’m not going to train and I’m not going to try and fight to get back? Of course I am. I’m far from being done. I have to be patient, which I am not very good at when it comes to that side of it. The golf part, when I’m on a golf course, I can be very patient. When it comes to this stuff, I love to train, I love to bust my butt, I love to get out there and try to get better. This is the complete flip side. They’re telling me that I can’t do anything in order to get better. That was a hard transition for me to understand, to wrap my head around because it’s so counterintuitive to how I’ve always been.”

Woods would go on to explain that his outward demeanor and perceived resignation were merely fall outs from the frustration of not having an end point in sight. Interestingly, the more Woods spoke about his predicament throughout the week, the more he seemed to have gained a more positive perspective, almost as if he was starting to believe what he was talking himself into, realizing all hope is not lost.