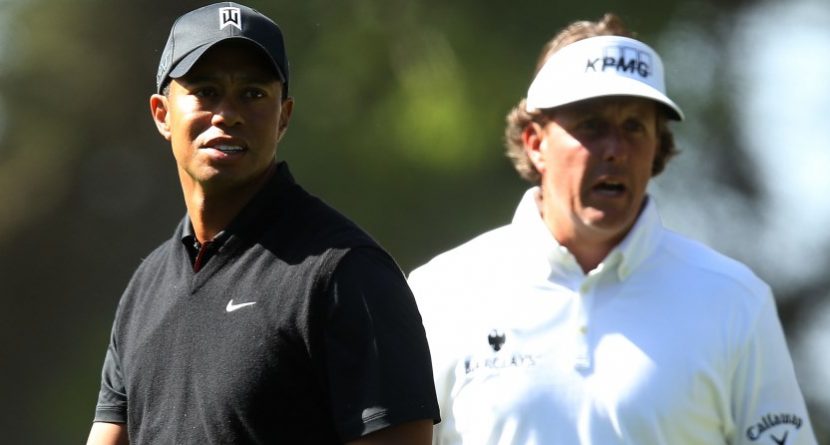 It wasn’t much of a secret, but the two richest men in golf will make their first 2014 appearances on U.S. soil at Torrey Pines later this month in the Farmers Insurance Open (Jan. 23-26). And the Farmers will mark Phil Mickelson’s first start of the year on the PGA Tour, with the San Diego event taking place not far from Lefty’s home. He plans to play the Abu Dhabi HSBC Golf Championship from Jan. 16-19 before arriving at Torrey Pines, where he’s won three times (1993, 2000-01). Woods will look to add to the $83 million he collected in 2013, according to Golf Digest. He earned over $12 million from playing golf, and $71 million in off-the-course ventures. That reportedly pushed Woods’ career earnings past $1.3 billion.

Mickelson, meanwhile, collected more than $52 million last year – $7 million on the course, $45 million off it.

The next two men in Golf Digest’s 2013 money rankings might surprise you, but their names are certainly familiar. Arnold Palmer checked in at No. 3 due to $40 million earned primarily from licensing deals, and Jack Nicklaus ranked fourth with $26 million.

Isn’t that incredible? Palmer and Nicklaus are still cashing in from their legendary golf careers, and making more than every other current player in the world except for Woods and Mickelson.