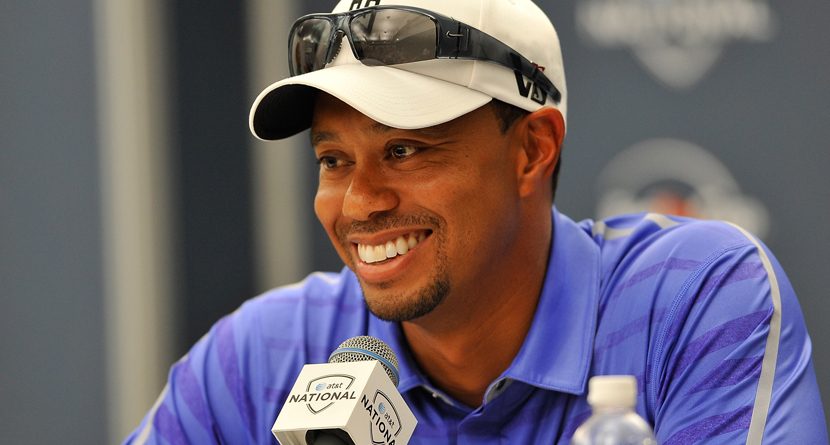 Tiger Woods met the media on Wednesday ahead of the AT&T National and revealed more about his injured left elbow.

The injury, which has been characterized as a strain, has been bothering him for more than a month. It was made worse during the U.S. Open, when he was forced to hack his way out of the heavy rough that lined the fairways of Merion Golf Club.

“I pushed it pretty good at the Open to play it and to play through it,” Woods said. “Made it worse by hitting the ball out of the rough and eventually got to a point where I wasn’t able to play here.

“We’re treating it and eventually I’ll start the strengthening process. Then start hitting balls and get up to speed for the British.”

Woods was then asked how strong the elbow will be for the British Open, which takes place July 18-21 at Muirfield.

“How about … good enough,” he replied. Woods has a lengthy injury history, which mostly includes lower-body ailments except for back and neck issues he suffered from in 2010.

The world’s No. 1 golfer is not playing at the moment as he tries to heal the injury through massage, ice and anti-inflammatory medications.

“Good enough” might have worked with the younger version of Woods, but the older one, the one who is no longer invincible and unbeatable, will need more than that to beat the field and win his fourth Open title.