Tiger Woods Shoots 3-Under, Getting ‘Sharper and Stronger’ 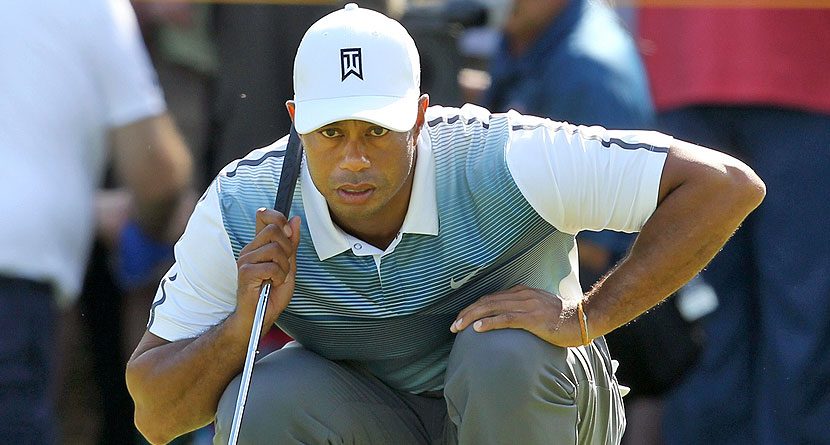 HOYLAKE, England — It was at around 9 a.m. in Hoylake that it became obvious something special was stirring. Players had been respectfully introduced on the first tee, but this was different. A golfer marched purposefully to the tee and the noise grew.

Tiger was back! “Ladies and gentlemen, on the tee, Tiger Woods.” The reaction was deafening, and even Woods seemed pleased. He touched his white cap, smiled and prepared to strike his opening tee shot.  Forty-two players were already on the course but, with respect to each and every one of them, the Open Championship was now truly under way.

It has to be said, the 14-time major champion looks fit and lean, and it is a joy to see him swinging well within himself. But, from the perfect position, Woods found the right-hand greenside bunker while Stenson finished in the sand on the left. Woods cleared the green with his bunker shot. This wasn’t in the Tiger script. In the end, he did well to hole a four-foot putt for bogey. And the shot he dropped at the second wasn’t in the plan either. It was all terribly scrappy stuff. He needed a birdie, and he needed it soon, and it duly came at the par-5 fifth.

Mind you, he was three ahead of Cabrera, who stumbled through the front nine in 39 strokes. Stenson was at even-par 35.

And then, finally, somebody flicked the switch. A birdie at the 11th took Woods to level par, and he had finally clawed back those early dropped shots. Then came an imperious approach to the 12th. Stenson, who had moved to 2-under, made Woods wait when he knocked his birdie putt off the green. Nothing to do with the greens, it was simply a dreadful shot. He eventually finished with a six and dropped back to level par. Woods drained the putt — 1-under.

And at the 13th, a par 3, he put his tee shot eight feet from the pin. Down it went. Three birdies on the trot and the great man was 2-under. This was in the script. Having done all that hard work, Woods struck a wild drive at the 14th which cost him another bogey. But he shrugged it off immediately, a 20-foot putt at the 15th giving him another birdie. There was no stopping him now, and his fifth birdie in six holes came at the 16th. Two-over after two holes, he now stood 2-under.

If Woods was still experiencing any lingering problems with his back, he put them fully to the test at the 18th. Leaving his second shot to the par 5 in a horrible spot in a greenside bunker, he had to contort his body and did superbly to get the ball out to 25 feet. He then ran his birdie putt four feet beyond the hole. Woods really didn’t want to spoil an incredible back-to-the-wall round by dropping a shot at the last — and he didn’t. After the start he made, he was delighted with a 3-under round of 69.

“I figured out how to manage my way around the golf course after an awful start, but got back to even-par on the turn,” he said. “I know what it’s like to win here but the golf course is completely different to when I won in 2006. It’s much lusher. The weather forecast will change things over the next few days though.

“It feels great to be competing again at the elite level. The more rounds I play I’m getting sharper and stronger.”

Stenson, who visited some uncharted parts of the course, was three behind Woods, with Cabrera’s 76 being a round he will want to forget in a hurry.