Tiger Woods Should Plan for a 2016 Masters Return 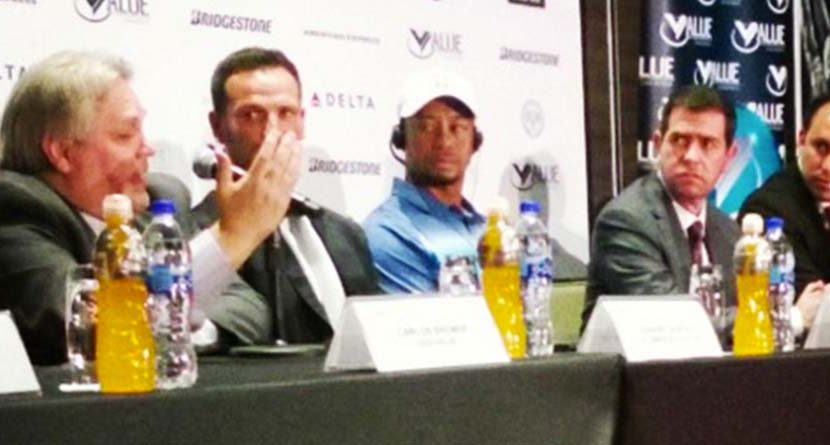 Tiger Woods met with the media on Oct. 20 at the Bridgestone America’s Golf Cup in Mexico City for the first time since his second microdiscectomy surgery and Dr. Woods’ prognosis cast a shadow of doubt over his availability for the (already started) 2015-16 season.

Woods is over a month out from his Sept. 16 surgery, the second such operation performed by Park City, Utah-based neurosurgeon Dr. Charles Rich. The follow-up surgery was done to remove a piece of a fragmented disc that was again pinching a nerve in his lower back. Doctors discovered the issue in a routine check-up and urged Woods to undergo another procedure to ensure a full recovery.

On a more cautious schedule this second time around, Woods said he hasn’t even begun his rehabilitation and that he is planning for a “long and tedious rehab.” He also warned that many pros who have undergone the same procedure require more than a year to be pain free, most notably, Graham DeLaet.

I feel for Tiger having another back surgery. Unless you've been through it, you cannot understand what it takes to get back to "healthy"

So, what do we know as it pertains to Woods?

Obviously, Woods has already missed the Frys.com Open, he won’t be playing this week at the America’s Cup and he announced on his website that he wouldn’t be participating in his foundation-hosted Hero World Challenge the first week of December. Woods will have had more than four months off between surgery and the start of the Farmers Insurance Open at Torrey Pines, annually his first event on the PGA Tour.

Comparing the timelines between his two microdiscectomy surgeries, Woods took only 100 days off between his first surgery on March 31, 2014 and his return to competitive golf at the Quicken Loans National at end of June. Operating under the assumption that Woods is not simply providing lip service — always needs to be taken with a grain of salt — the next and more likely dates circled on his calendar would be either the Honda Classic (Feb. 25) or the Arnold Palmer Invitational (March 17). That would give Woods five-to-six full months away from competitive golf.

Should he truly be looking at the longterm, the Masters would likely be his finish line, April 7. This is the date that makes the most sense. Now six surgeries (four knee, two back) into his career and turning 40 at the end of December, preservation must win out over impatience. Woods again reiterated that he hopes to surpass both Jack Nicklaus’ 18 major championship mark and Sam Snead’s 82 PGA Tour wins. If he’s going to accomplish the former, the latter will be achieved as a byproduct. There is no reason for Woods to force a start between now and April 7.

He has proven in the past that the reps and patterns and processes he subscribes to religiously hold no bearings when it comes to Augusta National. He may not win his fifth green jacket come April 2016, but he’ll be in a much better place physically to win more tournaments and more majors if the Masters is his first competitive event post-op.