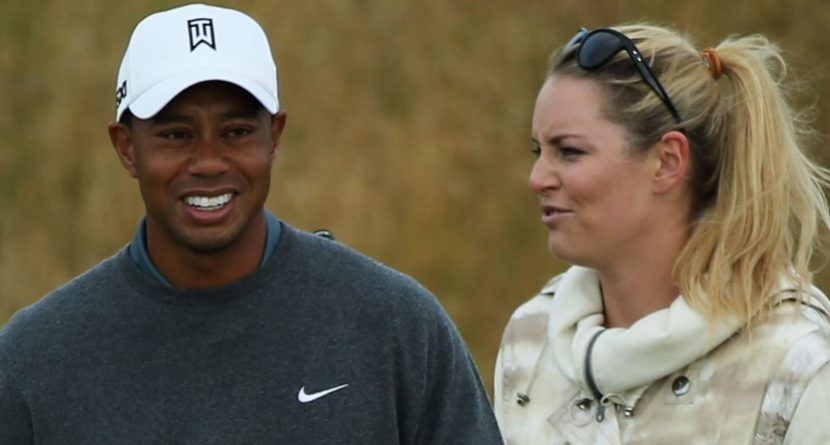 After hitting golf balls on bridges between continents last week, Tiger Woods is back in North America this week, and hitting the slopes with girlfriend Lindsey Vonn in Colorado.

The two were spotted in Breckenridge on Wednesday by someone who got Vonn to turn around and smile for the camera while in a lift line. That someone was Sarah Schleper, a former U.S. Alpine ski teammate of Vonn’s.

I spy @lindseyvonn and @TigerWoods skiing in Breckenridge today. pic.twitter.com/IUzvgVn1tf

That’s clearly Vonn in her trademark Red Bull helmet, and considering the source, it’s safe to assume the skier to her right in red and black is Woods. Of course he’s wearing red and black. And that’s likely Woods’ daughter, Sam, in the middle.

@TigerWoods Heard you were on the slopes shredding it up. Sad I missed you.

And if it weren’t certain enough, an Instagram post on the same day confirmed Woods’ appearance. From the hashtag-heavy @jre_87: #Tiger Woods today on the mountain getting some lunch. #life #goal #idol #hero #success #creeper #GOAT #breck #brecklife #golf #TMZ

Vonn told David Letterman a couple weeks ago that Woods is a good skier but trying to get better. The man never ceases to improve.