Tiger Woods Speaks On DJ At The U.S. Open, His Potential Return To Golf 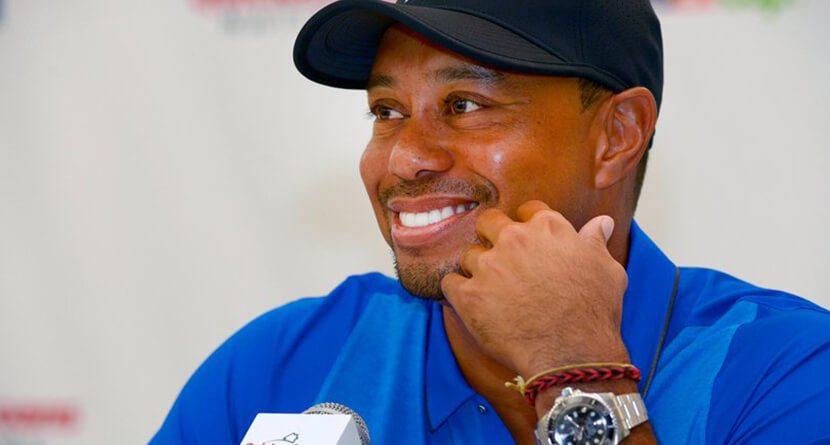 An upbeat, positive and healthy-looking Tiger Woods met with the media on Wednesday at the Quicken Loans National, which benefits his Tiger Woods Foundation. In an all-encompassing 25-minute press conference, Woods touched on a myriad of topics, from his health and possible return, to watching the U.S. Open on Sunday and his relationship with current No. 1 player in the world, Jason Day.

Here are some highlights:


On his health and return

Tiger knows what it takes to return from injury. Says it’s going to take more time but “hopefully not very long.” https://t.co/q7bja0cF5L

On the U.S. Open, via Kyle Porter at CBSSports.com

“I watched,” said Woods. “It was awful because no one knew what was going on. D.J. didn’t know how he stood. The rest of the guys ahead of him didn’t understand what was going on. No one had a clue. Am I tied for the lead or am I leading the tournament? Am I one back or am I tied? No one understood where they stood in the tournament so that determines what you’re going to do.

“It wasn’t a matter of integrity. It was a matter of getting the ruling right. If you have a rules official there, I thought it was binding, his decision. Whatever he decides, he decides. I didn’t understand how they could say, ‘We’re going to take you in, we may or may not assess you a penalty. You still have six holes to go, but who knows who’s leading the U.S. Open.’ I didn’t see how that was appropriate.

“It was frustrating to watch how it was handled. That championship being our national title and the history behind it, it deserved a better handling of the situation. I’m a little bit feistier than Dustin so I think I would have said a few more things during the round.”

You can watch the entire news conference here.