Tiger Woods To Miss Masters For 1st Time in Career 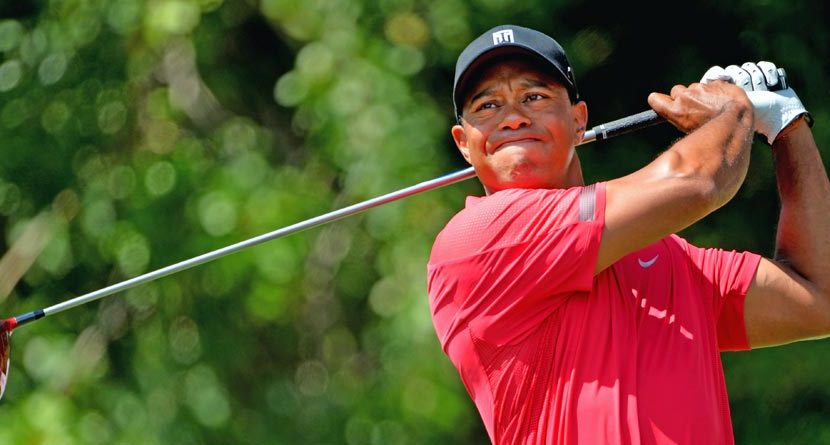 World No. 1 Tiger Woods will miss the Masters Tournament for the first time in his career. He announced the disappointing news Tuesday on Twitter:

Sad to say I’m missing the Masters. Thanks to the fans for so many kind wishes. http://t.co/Ofbre9VHEL

Woods had more to say on his website, where it was revealed that the four-time Masters winner underwent surgery for a pinched nerve and will miss several weeks of golf. But he hopes to return sometime this summer.

“After attempting to get ready for the Masters, and failing to make the necessary progress, I decided, in consultation with my doctors, to have this procedure done,” Woods said.

“I’d like to express my disappointment to the Augusta National membership, staff, volunteers and patrons that I will not be at the Masters,” Tiger added. “It’s a week that’s very special to me. It also looks like I’ll be forced to miss several upcoming tournaments to focus on my rehabilitation and getting healthy.

“I’d also like to thank the fans for their support and concern. It’s very kind and greatly appreciated. This is frustrating, but it’s something my doctors advised me to do for my immediate and long-term health.”

This would mark the first time in his career that he doesn’t compete at Augusta National; he’s played every year since 1995. In 19 appearances, Woods has finished in the top eight 13 times, and he’s collected four green jackets. From 2005-11, he finished in the top six each time.

“Tiger was gracious in keeping us updated of his condition and making us aware of his decision,” said Augusta National chairman Billy Payne. “We wholeheartedly offered our best wishes for his immediate and long-term recovery. Tiger will be in our thoughts and will be missed by our patrons and all of us at the Masters tournament next week. He is one of our most decorated champions and we look forward to his healthy return in 2015 and beyond.”

And so the wait for Woods’ first major title since the 2008 U.S. Open continues. He remains on 14 majors for his career, four shy of Jack Nicklaus’ all-time best of 18. Woods is also sitting on 79 career PGA Tour victories, three shy of Sam Snead’s record. Woods addressed those milestones Tuesday.

“It’s tough right now, but I’m absolutely optimistic about the future,” Woods said. “There are a couple [of] records by two outstanding individuals and players that I hope one day to break. As I’ve said many times, Sam and Jack reached their milestones over an entire career. I plan to have a lot of years left in mine.”

Said Nicklaus in a statement on his website: “I am sorry to hear that Tiger will miss the Masters Tournament. I know Tiger has been working very hard to return to form, and as I have said many times, Tiger has a lot of years of good golf ahead of him. I hate to see him robbed of some of that time by injury. But we all know he is doing what is in the best interest of his health and future. I wish him well on a speedy recovery.”

The 2014 U.S. Open starts June 12 at Pinehurst, giving Woods more than two months to prepare. His website stated that he could possibly begin chipping and putting again in three weeks, depending on doctors’ orders. But some experts indicate that this type of surgery will keep Woods from playing any major in 2014.

According to ESPN injury analyst Stephania Bell, “the average recovery time for surgery like Woods had is 4 1/2 months.”According to Will Carroll at Bleacher Report, “This is common surgery, but due to the nature of his swing, Woods is unlikely to play any of the majors this season while he rehabs and likely is forced to make more changes to his swing.”

After the U.S. Open comes the Open Championship beginning July 17 and the PGA Championship starting August 7.