To Save Strokes, Work On Your Flat Stick 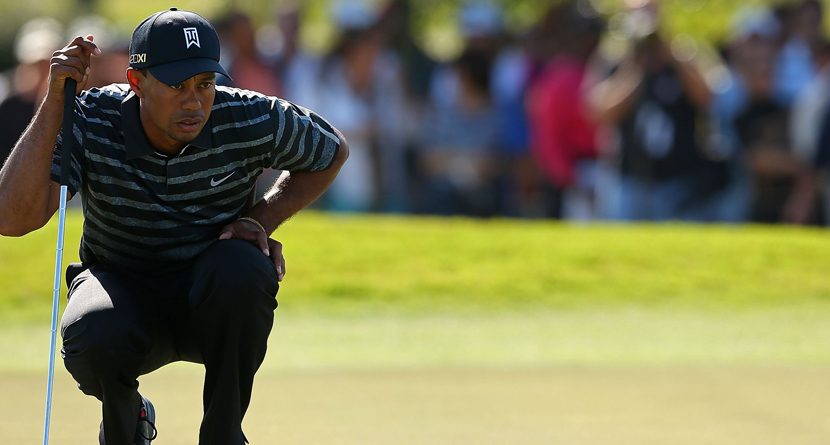 Ann Gordon is a pharmacist in Franklin, Ind. She is a very good player, a consistent 4-handicapper who played collegiately at Purdue. We were talking a little golf last week when I went to pick up a prescription and Ann was asking why anyone would pay big bucks for a putter. I was kind of shocked that a player of Ann’s ability would ask that question.

I quickly pointed out to her that most players hit a driver no more than 14 times during a normal 18-hole round and, at the same time, will probably take over 30 strokes on the putting greens during that same round. In my opinion, the most important club in player’s golf bag is their putter.

Tiger Woods became the No. 1 ranked player in the world this week by virtue of his victory in the Arnold Palmer Invitational. Tiger has resurrected his golf game in 2013 and his ability to make putts has been a major reason. The win at Bay Hill was his second in two starts since he received a putting lesson from his good friend Steve Stricker at the WGC event at Doral.

“I probably got more publicity from that putting lesson I gave Tiger than anything I have ever done in my career,” a smiling Stricker told me last week.

Rory McIlroy had his thoughts a couple of weeks ago when he visited PGA of America headquarters to receive the Player of the Year Award and Vardon Trophy. McIlroy, who surrendered the world’s top ranking to Tiger this week, relayed this story:

“I actually texted Tiger after the tournament and said, ‘I am sure Steve is kicking himself for giving you that putting lesson,’” McIlroy recalled. Stricker finished runner-up to Woods at Doral.

“I don’t know. I don’t think it was the right thing to do. He is a good enough player as it is,” he continued. “When guys are good friends you try and help as much as you can. Steve and Tiger obviously have a good relationship. And Steve is probably one of the best putters in the world, if not the best putter in the world.”

So, Rory, would you take a putting lesson from your good friend Graeme McDowell?

“No, but I’ll take one from Stricker,” he said, laughing.

Woods was No. 1 on the PGA Tour in scoring average heading into the Bay Hill event with 68.48 strokes per round. He was 127th in driving accuracy, hitting only 56.5 percent of his fairways. Woods was ranked a mediocre 59th in greens hit in regulation at 68.1 percent. Surprisingly, Woods was 103rd in scrambling, getting it up and down only 59.4 percent of the time.

Here is the importance of putting. Woods was sixth in the PGA Tour’s most critical putting category — strokes gained in putting. He averaged 27.75 putts per round, which ranked him 10th on the Tour, and he’s 14th in “one putts,” with eight per round. Woods was seventh in “three putt avoidance,” with just three in 216 holes played.

During the four rounds at Bay Hill, Woods had saved pars nine times with putts of over six feet in length. His longest par save came from 21 feet. Any golfer who has watched Woods notch one of his three PGA Tour victories this year will testify that he is winning because he is making putts. Woods continues to miss fairways and greens with “un Tiger-like” regularity, but he manages to get the ball in the hole.

So, back to Stricker. What is the secret to the knowledge he departed on Woods. In a Golf Digest article called, “Steve Stricker Shares His Putting Secrets,” you can learn several things.

“I like to grip the putter fairly tight in my left hand, probably a 7 on a scale of 1 to 10, but my right-hand grip is considerably lighter,” Stricker said. “I grip the putter in the palm of my left hand, not the fingers. It’s resting on my lifeline. This gives me a feeling of unity between the putter’s shaft and my left arm.

“I actually ‘waggle’ my putter by bouncing it against the turf a little before I make the stroke. It’s hard to go from a static position into a fluid stroke, so that is what I do to make it smoother. Also, my putter sits with the heel slightly off the ground, which results in a straighter back and through motion.” Stricker also incorporates a slight forward press on his takeaway.

“At address my left wrist is cupped, and my goal is to maintain that angle throughout the stroke,” he continued. “I believe this helps me strike the ball consistently in the same place on the putter’s face as well as put the best roll possible on the ball.”

Stricker doesn’t worry about speed. He just picks his line and concentrates on hitting the ball on that line. His ball position is pretty standard, somewhere between one and two inches off his left foot. His stroke is pretty straight-to-straight. His putter will come slightly inside the target line. He feels the hardest putt is a short, downhill curler. Stricker says all you can do is pick a line and tap it.

One other thing that all great putters like Stricker Woods do is keep the putter low to the ground on the backstroke. This will put more top spin on the down stroke and help the ball roll out, instead of bounce. I see many amateurs picking their putters up on the backstroke, which promotes a steep angle of attack. The ball will hop, instead of roll, to the hole.

So, what can you do to be more like Tiger Woods? Given his average of 27.75 putts and 68.48 strokes per round, this means that 40 percent of Tiger’s strokes take place on the putting green.

It will be worth your time to get a putting lesson from a PGA professional. Take the time to get fitted for a putter. The length of the putter, along with its loft and lie, are critical. Start keeping track of your putting statistics. Make it a point to know how many putts per round you take. Identify your three-putts, which will indicate your ability to lag putt. Your one-putt greens will tell you whether or not you are a good chipper.

Ann, are you listening?