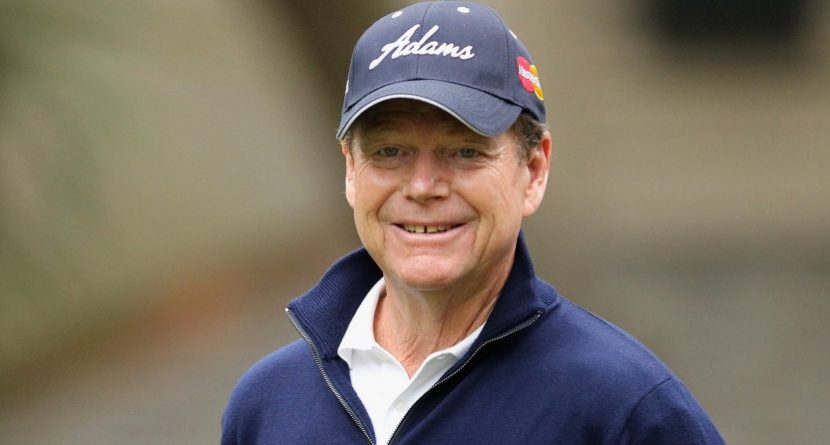 Just a few a few months removed from winning his 18th and final major championship, Jack Nicklaus was dining with Tom Watson in the main dining hall of the hotel at the Turnberry Golf Resort on Saturday evening of the 1986 Open Championship when the tournament’s 54-hole leader, 31-year-old Greg Norman, greeted those at the table.

The greatest golfer ever summoned over the man who had yet to capture a major, though he finished runner-up to the 46-year-old Nicklaus at that year’s Masters. Norman bent down and lent an ear. As the youngster left, Watson asked the Golden Bear what he’d told Norman.

“Just be careful about your grip pressure tomorrow,” Nicklaus said. Sure enough, Norman went out the next day and won his first career major by five strokes.

Watson recalled that story Thursday while on a media teleconference to promote his latest instructional golf DVD program, “Tom Watson Lessons of a Lifetime II.” With Watson preparing to captain the U.S. team this fall at the Ryder Cup, he was asked which of his lessons would be good for his players to watch prior to departing for Gleneagles, Scotland. He thought grip pressure, though basic, might be a good one considering the figurative pressure his squad will be under as the Americans try to rebound from the Europeans’ Miracle at Medinah in 2012. As for who will bear the load of that pressure, Watson hopes he’ll have world No. 1 Tiger Woods at his service.

“Obviously the most disheartening surprise is Tiger’s (back) injury,” Watson said Thursday. “I want Tiger on the team and I hope that he can recover from that injury and make it on the team, and start playing well enough to get on the team.”

More likely to be in the lineup is a new guy Watson really likes right now: Jimmy Walker, the 35-year-old who’s notched his first three career PGA Tour wins all this season.

“Jimmy Walker thoroughly impresses me. I played a practice round with him at Augusta. He’s a wonderful player – just fundamentally solid, hits the ball nine miles, can work the ball both ways. He’s a great player; very good touch around the greens. He’s coming in from under the radar, but man, he can play,” Watson said.

“Lessons of a Lifetime II” is a sequel to the popular two-disc set Watson released in 2010, and is a result of Watson thinking up more lessons just as the first batch was being burned onto discs. You can buy all three DVDs for $49.95, or just the latest disc for $29.95 at TomWatson.com.