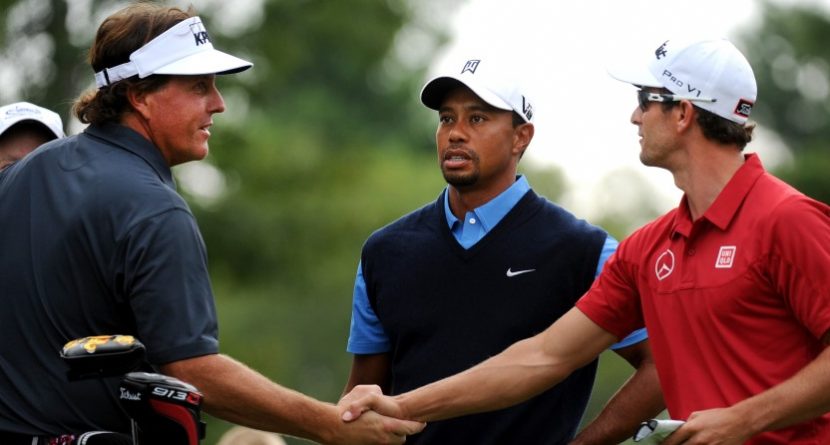 How do you pick a player of the year from 2013? Tiger Woods won five events, but none were a major. Henrik Stenson captured three titles worldwide, as well as the season-long points races in the U.S. and Europe, yet he didn’t win a major either. Adam Scott did, the first of his career, but that was one of only two PGA Tour wins. Inbee Park grabbed three majors on the women’s side; how does that rank among all golfers?

Let’s just settle on 13 players of the year. That should about cover everyone.

Tiger Woods: He returned to the top of the world rankings in March, and his five victories on the PGA Tour led to his selection as the tour’s Player of the Year. Woods’ major title drought extended another year, but he showed in 2013 he can never be counted out.

Adam Scott: A case can be made for Scott being the best golfer in the world this year, with his win at the Masters, his world-best +2 aggregate score at the four majors, and his near completion of the Australian Triple Crown. Regardless, he enjoyed a career year.

Henrik Stenson: The Swede turned in a spectacular year as well, especially late. He was runner-up at the Open Championship, third at the PGA Championship, and then won the second and fourth legs the FedExCup Playoffs (Deutsche Bank Championship and Tour Championship). That helped Stenson become the first golfer to win the FedExCup (PGA Tour) and Race to Dubai (European Tour) in the same season.

Phil Mickelson: Little was expected out of Lefty this year, but there he was leading the U.S. Open. Of course, he heartbreakingly lost that tournament again, but he responded in stellar fashion: winning the Scottish Open as a preview to his come-from-behind triumph at the Open Championship. Now he’s talking career Grand Slam in 2014, which means he just needs to tame the U.S. Open.

Justin Rose: One of the unsung stars of 2013, largely because his U.S. Open win was somewhat overshadowed by Mickelson’s collapse, Rose chalked up seven top-10s and more than $4.1 million in winnings. And he got the major monkey off his back; a second one sometime soon won’t be a surprise.

Jason Dufner: Be honest – did you know who Jason Dufner was a year ago? Maybe you did because you watched the 2011 PGA Championship, when he handed the trophy to Keegan Bradley. But Dufner became an internet sensation with #Dufnering in April and his PGA Championship title in August. He’s now a must-follow on Twitter.

Inbee Park: If golf were only about the majors, Inbee Park is the runaway winner of 2013. She won the first three of the women’s season before coming up short in her bid to become the first golfer in history to win four professional majors in one season. But she’s now won four in her career, which is still in the infant stages.

Stacy Lewis: The woman who captured the fourth major of the season, the Women’s British Open, was Stacy Lewis. It marked the second of her career, and helped on her way to the Vare Trophy for the LPGA Tour’s lowest scoring average. Lewis was the first U.S. player since Beth Daniel in 1994 to claim that honor.

Jordan Spieth: Unless you’re from Texas, surely you hadn’t the slightest idea about Jordan Spieth prior to 2013. But he surged onto everyone’s radar with his stunning win at the John Deere Classic, and proved his worth on the PGA Tour the rest of the season. The 20-year-old finished 10th on the tour’s money list, tied for the PGA Tour lead with nine top 10s, and was the Rookie of the Year.

Steve Stricker: Winning majors is nice, but who wouldn’t swap lives with Steve Stricker right now? The 46-year-old cut back his schedule this year so he could spend more time with his family. Yet in 13 PGA Tour events – the fewest among anyone who earned at least $1 million – Stricker collected $4.04 million, or $341,579 per tournament.

Lydia Ko: Already the youngest person to win a LPGA event, Ko won another one in 2013 and nearly collected her first major at the Evian Championship, where she finished second. A month later she turned pro, and captured her first pro win in her second start. On Thursday, she signed with IMG , one of the largest athlete representation firms in the world.

Kenny Perry: Perry has yet to win a major on the PGA Tour, despite finishing second or third multiple times. But the 53-year-old collected two on the Champions Tour this year alone, propelling him to take the season-long points race (Charles Schwab Cup) as well. His prime may have passed, but a man can still make good money winning big on the senior tour.

Jarrod Lyle: He only played one event all year, and he never contended for the top of the leaderboard. But Jarrod Lyle made the cut and placed 57th overall at the Australian Masters in November, marking his first tournament since a second bout with leukemia. He spent 20 months away from golf, but received the warmest of welcomes upon his return.