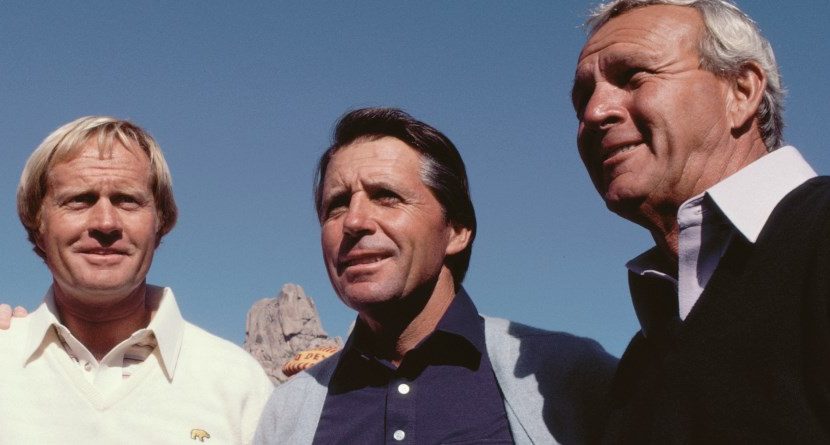 While Don Draper and his account executives from the Sterling Cooper Draper Pryce advertising agency in the hit TV drama “Mad Men” were out closing business deals on the golf course, they were surely doing their best to mimic the top golf professionals of the day. And looking back, the 1960s might have been the greatest era the game of golf has ever seen. Witness the final day of the 1960 U.S. Open at Cherry Hills Country Club just outside of Denver. The legendary Ben Hogan was three shots off the lead, tied with a 20-year-old amateur named Jack Nicklaus. But the title was taken by Arnold Palmer, who turned in a 6-under-par 65 to beat Nicklaus by two strokes. Hogan was tied for the lead going into the 17th hole, a par 5, and aimed his second shot for the green. But it found water and he bogeyed. A birdie on 18 would have given him back a share of first place, but he splashed his ball again and triple-bogeyed to end up ninth.

Some historians call that day at Cherry Hills the greatest in major championship history. While that may be up for debate, what’s certain is that the tournament signaled the coming to a close of Hogan’s career, the prime of Palmer’s, and just the beginning of Nicklaus’.

Those three were joined by a couple others to make the 60s the “Golden Era of Golf.” So in honor of the “Mad Men” Season 7 premiere on Sunday, here are the five best players from that decade:

Jack Nicklaus
Nicklaus may have come up short in 1960, but he was stellar at the U.S. Open two years later, his first year as a professional. He captured his first major title by fending off Palmer in an 18-hole playoff. From there, the kid went on to win six more majors in the 60s: the Masters in ’63, ’65 and ’66; the U.S. Open again in ’67; the Open Championship in ’66; and the PGA Championship in ’63. Nicklaus collected eight more major titles in the 70s and three more in the 80s to finish his resplendent career with an all-time best 18 majors.

Arnold Palmer
The 1960 U.S. Open marked the third major title for Palmer, and second that year, as he also won the 1960 Masters. Palmer then picked up championships at the 1962 and ’63 Masters, and the ’61 and ’62 Open Championships, for a grand total of six majors won in the 60s, and seven overall. The only major title missing from his resume is the PGA Championship, but he was close three times, tying for second in ’64, ’68 and ’70. And he was close to winning many more majors, as Palmer finished runner-up seven more times in the other three major tournaments. Gary Player
About the only other golfer who could hang with Nicklaus and Palmer in the 60s was Player; the trio often was referred to as “The Big Three.” A South African who secured his first major at the 1959 British Open, Player went on to win four more majors in the 60s – the ’61 Masters, ’62 PGA Championship, ’65 U.S. Open, and ’68 Open Championship, thus giving him the career grand slam. He racked up four more major titles in the 70s. Ben Hogan
So the 60s weren’t exactly Hogan’s best years, as the last of his nine majors was won in 1953. But he was a legendary figure who contended at the aforementioned 1960 U.S. Open, and he also tied for sixth at that year’s Masters. Seven years later, the man was 54 when he shot an astounding 30 on the back nine in the third round of his final Masters tournament. That record stood until 1992. He ended the tournament tied for 10th, and later that year was named captain for the U.S. Ryder Cup team. Sam Snead
Slammin’ Sammy’s prime also came prior to the 60s, as his seven majors spanned 1942-54. But that sweet swing of his turned in seven top-10 finishes at majors in the 60s, including third-place results at the 1960 PGA Championship and 1963 Masters (two strokes back each time). He was the U.S. captain at the 1969 Ryder Cup, and his competitive playing days actually continued on well into the 70s. Snead’s 82 career PGA Tour wins still stand No. 1 all time.