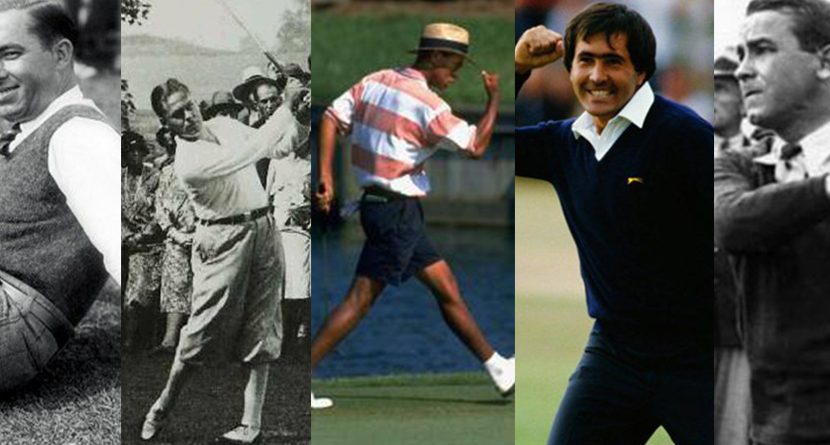 In honor of the PGA Tour’s annual one-on-one tournament, the WGC-Dell Match Play, we count down the five best match players of all time.

Playing in the golden age of match play, Sarazen had to face off with the likes of Bobby Jones and Walter Hagen, yet The Squire still won his fair share of events. He won three match play PGA Championships — his first at age 22 in 1920 — and went on to compete over the course of the following three decades. Match play is as much about out-playing your opponent as it is out-willing them. Ballesteros was the king of both. Combine Seve’s back-breaking recoveries, his passion and his refusal to give an inch and you have one of the best match players of all time. “I look into their eyes, shake their hand, pat their back, and wish them luck. But I am thinking, ‘I am going to bury you,'” he said. Aside from the gamesmanship, Ballesteros’ record backed up his spot on this list, winning five World Match Play finals in the late 1980s and early 1990s. Despite playing in an era that lacked many match play competitions, Woods’ ability to manipulate and overcome opponents in a one-on-one setting stands above. Tiger’s run of three consecutive U.S. Amateurs, along with his three wins at the World Golf Championships Match Play and his underrated 10-3-2 record in combined appearances for the U.S. in international competition is more than enough to put him on this list. The lifelong amateur’s crowning achievement came in 1930 when he won the calendar Grand Slam, but Jones’ acumen in match play is evident throughout his laundry-list of accomplishments. A hothead in his early years, once Jones learned to control his emotions, he controlled his opponents. The winner of six match play major championships in the span of seven years as well as five U.S. Amateurs and a British Amateur, Jones earned his way near the top of this list. The best match player of all-time, Hagen married gamesmanship with game. The winner of five match play PGA Championships — including four straight from 1924-1927 — Hagen famously hacked his around the course only to make a putt and win the hole. “Three of those and one of them still count four,” he would say. His penchant for entertaining was always near the top of the list, just behind winning. He went 7-1-1 in nine Ryder Cup matches.