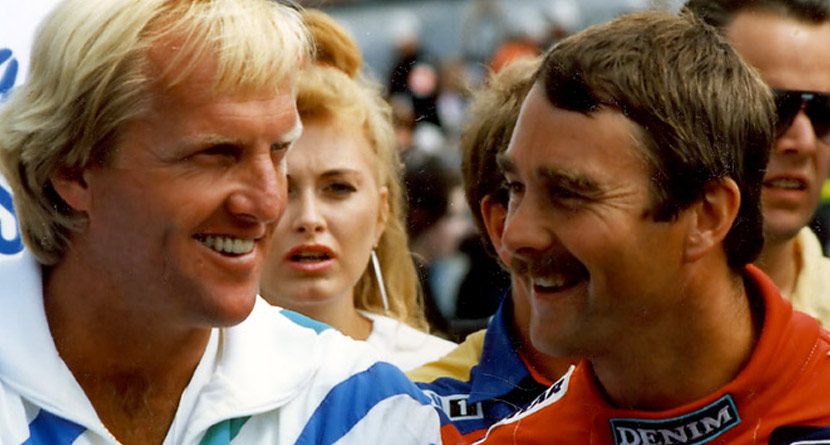 Memorial Day weekend is the unofficial start of summer. It’s the time of year when people break out the grills and pasty white skin for the first time since September. It’s also one of the busiest weekends in auto racing, with NASCAR, IndyCar and Formula 1 all in action in marquee events.

Despite the vast differences between the vehicles they race, Formula 1 and IndyCar drivers do share a common interest off the track, as do many NASCAR stars: golfing. Here’s a look at the top 9 F1 and IndyCar golfers.

Nigel Mansell is one of a handful of men who has won open wheel titles in both Europe and the United States, and is often regarded as one of the greatest F1 drivers of all time. He won his only Formula One World Championship in 1992 at the height of the “Prost-Senna” era. Following his retirement from driving in 1995, Mansell declared his desire to participate in golf’s Open Championship and, thanks to a friendship with Greg Norman, got to play in the 1988 Australian Open. He missed the cut after shooting 77-86.

The son of 1986 Indianapolis 500 winner Bobby Rahal, Graham has put together quite a little career for himself. Just 24 years old, Rahal has already notched a win and a handful of top-five finishes. Off the track, Rahal enjoys his golf. In fact, his foundation, the Graham Rahal Foundation, hosted the Third Annual “Drivers Tournament” benefiting Alex’s Lemonade Stand Foundation for Childhood Cancer and SeriousFun Children’s Network last week.

The third annual GRF Drivers Tournament is well on its way! @GrahamRahal tees-off with @ims in the near distance: pic.twitter.com/Q4a0mkVoO0

Montoya is one of the greatest drivers in racing history. A winner in NASCAR, IndyCar and Formula One competition, Montoya has won both the Indianapolis 500 and the Grand Prix of Monaco. He also picked up two wins in the NASCAR Sprint Cup Series. Off the track, Montoya is an avid golfer, often playing with fellow drivers. Recently, he showed off his new TaylorMade irons on Twitter and seemed nearly as proud of them as he is of his on-track achievements.

Got my new @TaylorMadeGolf irons. Love them. Can’t wait to try them. pic.twitter.com/2hYy1SQ1Py

Lewis Hamilton became the first black heritage driver to not only compete, but to win in Formula One. In 2008, Hamilton captured the F1 Driver’s Championship, making him the first black driver and the youngest ever to win an F1 World Championship. When he’s not setting records and winning races on the track, Hamilton can be found playing in celebrity tournaments around Europe and possibly hanging out with Henrik Stenson.

The 1996 Formula One World Champion has been retired from professional racing since 1999 and spends much of his time now playing golf. During his driving days, Hill was the primary on-track rival for seven-time world champion Michael Schumacher. He collected 22 F1 victories over the course of his career. Hill played most recently in the pro-am of the 2014 BMW PGA Championship, but has also taken part in numerous driver charity games and pro-am tournaments around the European Tour. Hill is also an accomplished guitar player, having rocked out with legends like Def Leppard and George Harrison.

American Danny Sullivan has raced in both American IndyCars and Formula One, achieving his greatest success in 1985 when he won the Indianapolis 500. Since his illustrious racing career came to an end in 1995, Sullivan began playing golf as often as he could. He has made appearances in dozens of celebrity tournaments, including the Alfred Dunhill Links and the prestigious AT&T at Pebble Beach.

Al Junior or Little Al or whatever you want to call him, Al Unser, Jr., could drive a race car. Over the course of his career, he tried his hand at all three of the major racing series, focusing mainly on IndyCar. The son of four-time Indy 500 champ Al Unser, Sr., Little Al went on to put his name on the Borg-Warner trophy twice. Since his retirement, Unser has spent his time on the links, playing in celebrity events and making public appearances.

Conor Daly is one of the bright young stars coming up through the IndyCar ranks. He’s also a big-time golfer. The son of prominent Irish Formula One and Champ car driver Derek Daly, the 22-year-old made his debut in the Indianapolis 500 last year and finished 22nd. This year, Daly looks to improve on that finish and his golf game. Last year, Daly snapped a photo during a round at the Brickyard Crossing Golf Course — which has four holes inside the race track — of the next IndyCar driver on this list.

Now, things could get confusing here. The world is apparently big enough for at least two Sebastian Saaverda’s. The one I’m talking about is the 23-year-old veteran (yeah, I know that sounds weird) in the IndyCar series. Coincidentally for this article, the other one makes a living on the PGA Latino America Tour. Saaverda, the racer, has spent his career on the track turning heads, becoming the youngest ever to make a start in nearly ever series he’s run in. Off the track, he likes to hit the links with his buddies, including fellow IndyCar driver, Conor Daly.