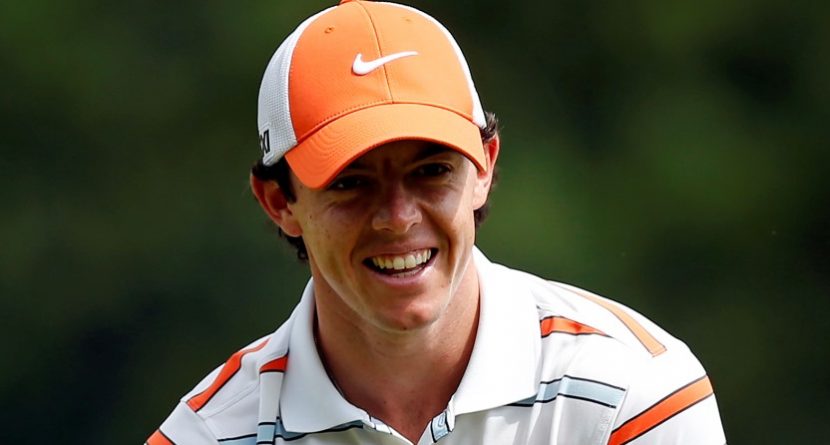 Rory McIlroy has endured a rollercoaster-like past few years, and no week better epitomized that than this past one, when he broke off his engagement with Caroline Wozniacki and then won the BMW PGA Championship. Such a remarkable win was it that it jumps into our list of favorite Rory McIlroy moments from the last few years:

Long before he was winning majors, McIlroy won the hearts of British golf fans by becoming the low-amateur at the 2007 Open Championship at Carnoustie. Rory held off the field to win for the first time as a professional at the 2009 Dubai Desert Classic. Prior to that win he had three straight Top 5 finishes, so we all knew it was just a matter of time.

Believe it or not, Rory didn’t record his first victory on the PGA Tour until the 2010 Wells Fargo Championship. You may remember him shooting a scalding 62 on Sunday to secure the win. Since that time he’s won six more times on Tour, including two majors.

How do you jump back from single-handedly blowing a massive lead on Sunday at The Masters? Go out in the very next major and blow away the field. That’s what Rory did at the 2011 U.S. Open for his first major championship.

If you weren’t impressed by his first major trophy, you better be amazed at what he did at the 2012 PGA Championship. Then only 23-years old, Rory demolished the competition en route to a seven-shot victory. He still owns the tournament scoring record, breaking that which was previously held by some guy named Tiger Woods.

Yeah, the announcement may have been a little over the top, but Rory’s switch to Nike Golf as his chief sponsor was one of the biggest stories of 2013. He seems to be more comfortable with his new equipment these days, which sometimes seemed like a challenge early on.

Rory Versus the Robot

Rory’s commercial featuring a driving range battle with a swing robot is one of the funniest golf commercials ever, and it became a viral internet sensation overnight.

Rory at the Ryder Cup

As a Chicagoan and an American, I’m still a little sore at the Illinois State Cop who escorted Rory to his 2012 Ryder Cup match after he woke up late. His performance on Sunday was magnificent, defeating Keegan Bradley in one of the weirdest matches in recent history.

With the eyes of the world upon him following a shocking split from fiancée Caroline Wozniacki, Rory McIlroy stepped up big time and won the BMW PGA Championship. For McIlroy, the win was his first since last December and since getting engaged to the tennis star on New Year’s Eve. Following the win, McIlroy remained mum about the breakup but did say that he felt “relieved.”