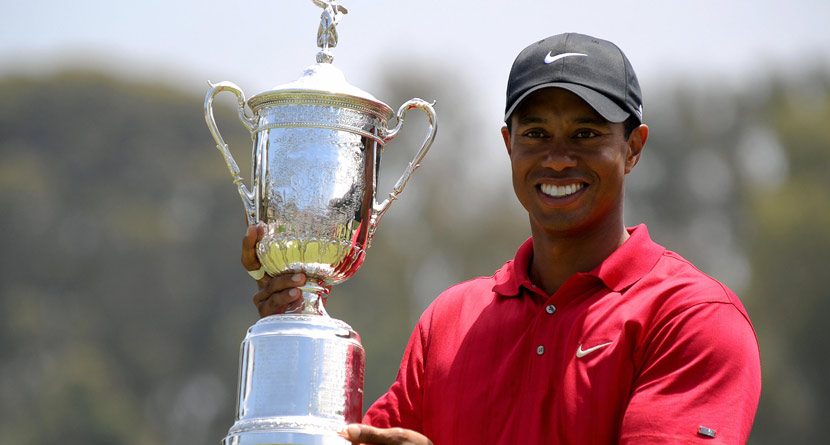 Often dubbed America’s national championship, the U.S. Open always features big-name players, pitting the best golfers in the world against one of the toughest courses in the country. The result: historic moments and great finishes.

Here are some of the top moments from 113 years of the U.S. Open:

Tiger Woods plays through pain, wins on bad knee in 2008

It’s one of those sports memories you’ll never forget. One of those moments that you know exactly where you were when it happened: Tiger Woods’ putt on 18 at Torrey Pines to force a playoff in 2008. It’s truly one of the best U.S. Opens in recent memory. It ultimately took 91 holes to determine a winner, with Tiger winning on the first sudden-death hole after the 18-hole Monday playoff. And he did it all on one leg. Barely more than a week after winning, Woods had reconstructive knee surgery and couldn’t swing a club for six months. If that’s not a gutsy performance, then I don’t know what is.

Alongside Woods’ win in 2000 at Pebble Beach, Rory McIlroy’s U.S. Open victory in 2011 will go down as one of the most dominant performances in the event’s history. Playing in his first major since falling apart at the top and shooting 80 in the final round of the Masters just a few months prior, McIlroy did everything but collapse at Congressional. In fact, he did quite the opposite. McIlroy went wire-to-wire for the win, leading all four rounds of the championship en route to an eight-shot victory over Jason Day. Just how dominant was McIlroy? Well, to start, he finished 16-under in what’s considered the toughest tournament in golf. The combined score for the previous 10 U.S. Open champions? Fourteen-under. He also set a U.S. Open record for the lowest score, finishing with a 268, breaking the previous mark held by Jack Nicklaus, Lee Janzen, Tiger Woods and Jim Furyk at 272. Quite the way to follow up a collapse. In 1999, Payne Stewart edged out Phil Mickelson by one shot and Woods by two, taking home his second U.S. Open title. Stewart made an 18-foot par putt on the final hole at Pinehurst No. 2 to secure the victory, ending Mickelson’s hopes of a U.S. Open victory. Lefty carried a pager with him during the final round for an important reason. His wife Amy was pregnant with their first child and expected to go into labor at any moment. Mickelson was prepared to walk off the course, putting his family before a major title.

In 2012, Andy Zhang became the youngest golfer to ever compete in the U.S. Open. While he didn’t make the cut, he did break 80 in each of the first two rounds, shooting 79 and 78. For a 14-year-old kid on the big stage of a major championship, Zhang surely held his own. Just two years later in 2014, Lucy Li, 11, will become the youngest golfer to compete in the U.S. Women’s Open.

Tiger Woods blows away the field in 2000

This was Tiger Woods at his best. Calling his performance “dominant” doesn’t do it justice. The only player under par for the week (-12), Woods won the championship by 15 strokes, the largest margin of victory for any of the four majors. The next closest competitors, Miguel Angel Jimenez and Ernie Els, tied for second, finishing +3 for the tournament. Needless to say, this one wasn’t even close.

Francis Ouimet shocks the world at the 1913 U.S. Open

Only five amateurs have ever won the U.S. Open, and it’s easy to see why: It’s one of the toughest tournaments on the schedule. In 1913, Francis Ouimet set the standard for amateur golfers, becoming the first one to win the U.S. Open. At just 20 years old, Ouimet topped Ted Ray in an 18-hole playoff. Ouimet was later featured in a movie, “The Greatest Game Ever Played.” Lee Trevino throws snake at Nicklaus, wins in a playoff in 1971

At the 1971 Open, Lee Trevino beat out Jack Nicklaus in an 18-hole playoff to claim his second U.S. Open championship. That may not sound all that interesting, other than the fact that Trevino beat the Golden Bear in a playoff, but it’s what took place on the first hole of the playoff that makes this a great moment. Trevino reached into the pocket of his golf bag, pulled out a rubber snake, and tossed it at Nicklaus, who was sitting by a tree on the tee box. Talk about an ice breaker on the first hole of a playoff, right? The joke was all in fun, as both players, as well as the gallery, shared a laugh. Nicklaus, unfazed by the rubber toy, went on to make birdie on the first hole, taking a one-shot lead over Trevino.

In 1960, Arnold Palmer completed one of the greatest comebacks in U.S. Open history, winning after trailing by seven strokes entering the final round. Just six years later, however, the tables were turned as Palmer held a seven-stroke lead over Billy Casper with only nine holes to play. Casper would tie Palmer, forcing an 18-hole playoff, which he would then go on to win by four strokes. This was more about a complete collapse by Palmer, rather than a victory by Casper. Nevertheless, Casper was crowned U.S. Open champion for a second time. Tom Watson won the 1982 U.S. Open by two strokes, but it was one shot on the 17th hole that defined his lone U.S. Open victory. Tied with Jack Nicklaus with two holes to play, Watson needed to birdie one of the final two holes, with Nicklaus already in the clubhouse at 4-under-par. Watson’s tee shot on the par-3 17th found the deep rough, leaving him with a tough chip shot to a green running away from him. Watson drained the chip to take a one-shot lead, then ran around the green in celebration. He’d go on to birdie the final hole to win by two, defeating Nicklaus in dramatic fashion.