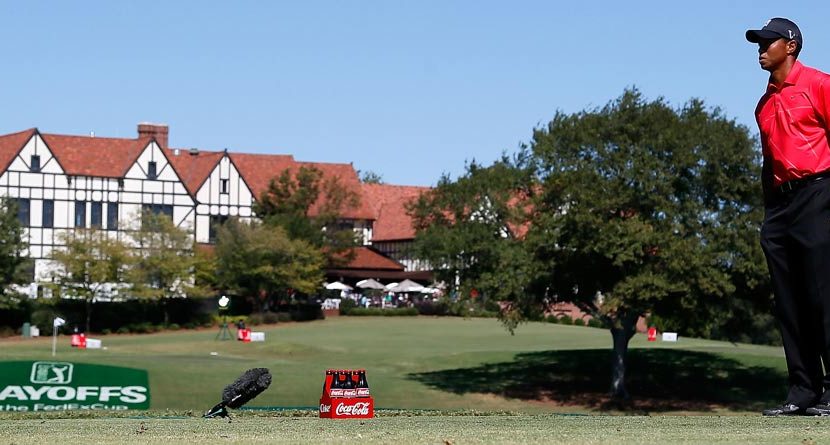 What started nearly nine months ago culminates on Sunday.

Those 100 points Matt Kuchar picked up for a fifth-place tie on Jan. 13 in Honolulu at the Sony Open helped him secure the No. 5 spot in the FedExCup standings heading into the PGA Tour’s final event, the Tour Championship. Every point matters.

And that fifth slot is key because only the top five guys are guaranteed of winning the FedExCup – which comes with $10 million – if they win the Tour Championship at East Lake Golf Club in Atlanta. If anyone outside the top five wins the tournament, they need help from others to get the Cup – i.e. they need the top five guys to struggle.

It can all get a bit confusing, so that’s why we’re here to help. Here are five things you need to know about the FedExCup finale:

1) Everyone has a (slight) chance to win
No. 1 in the points standings is Tiger Woods, who amassed 4,352 throughout the season. At No. 30, the last man in the field is Dustin Johnson, who earned 1,468 points – or 2,884 less than Woods. Considering a FedExCup playoff event win gives out 2,500 points, that would mean Johnson has no shot of surpassing Woods even if he won the Tour Championship. But in 2009, the PGA Tour reconfigured point distribution and decided to reset the top 30’s point totals for the last event. Now, Woods has 2,500; instead of 4,229 for Henrik Stenson in second place, he has 2,250; and so on, down to Johnson with 210. So with a Tour Championship win, each golfer has a mathematical chance – however minute – to win the $10 million prize. Here are all the scenarios.

2) Someone can win the tournament, but not the FedExCup
Each of the past three years, the winner of the Tour Championship also won the FedExCup. Last year, Brandt Snedeker won both from the No. 5 spot entering the finale. In 2011, 25th-ranked Bill Haas won the tournament, and each of the front-runners placed just poorly enough to allow Haas to claim the Cup. In 2010, Jim Furyk took the tournament and the Cup from the 11th slot. But in 2009, Phil Mickelson won the Tour Championship while Woods collected the larger FedExCup check and trophy. Woods finished second, not good enough for the tournament, but good enough for the Cup.

3) Jordan Spieth is the youngest player ever in the Tour Championship
The rookie who turned 20 on July 27 sits at No. 13 going into this weekend. A win for him is unlikely, seeing as how he has only one in his career. But considering he wasn’t even a professional at this time last year, and that his John Deere Classic win made him the youngest winner on the PGA Tour in 82 years, it’s safe to say this kid doesn’t play by conventional wisdom. Spieth has been in the top 20 at each of the three FedExCup playoff events, including a T-4 at the Deutsche Bank Championship.

5) Matt Kuchar is due
Of the top five heading into this year’s Tour Championship – Woods, Stenson, Adam Scott, Zach Johnson, and Kuchar – this marks the third time since the reconfiguration in 2009 that Woods and Kuchar have placed themselves in a coveted winner-take-all slot (it’s the second time for Johnson, and first for both Stenson and Scott). Woods has capitalized on that advantage; isn’t it time for Kuchar? He’s never won a major, so taking the biggest bonus in golf would be the next best thing. He’d also join Woods as the only man to win at least three events this year.

Other Hot Links:
– Win a Trip to Hang Out With Bubba Watson
– Photos of the Week – September 16, 2013
– Tweek in Review: This Week’s Best Tweets