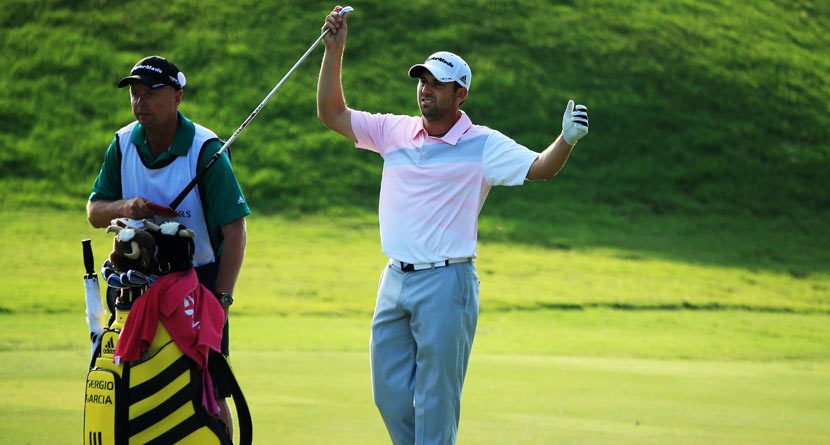 Previous page: Adam Scott Is Not The Masters Champion?

You may have heard – unless your mother forbids you from watching golf on her special day – that this guy named Tiger Woods won THE PLAYERS Championship on Sunday. With that, he took home a cool $1.71 million, his second victory as a pro on the vexing TPC Sawgrass Stadium course, and his fourth title in seven tournaments this year.

And he got another point in his little battle with Sergio Garcia.

Their war of words was all the focus Sunday. It started the day before – with the two paired together – when Garcia grew annoyed on the second hole. He claimed Woods caused a distraction that forced him to slice his shot into the woods, and he voiced his displeasure on NBC during the weather delay.

Word eventually got to Woods, who said, “I hear his comments afterwards and not real surprising that he’s complaining about something.”

Without saying much Sunday, the two finished off the four holes they didn’t get to play from the third round. But Garcia had much more to say to the media after the round.

“I’m not going to lie. [Tiger] is not my favorite guy to play with. He’s not the nicest guy on tour,” Garcia said.

[Editor’s note: We smell sitcom and generous use of #NotMyFavoriteGuy: The Hashtag.]

Fortunately for Garcia – unfortunately for fans wanting a juicy final round – the rivals were paired with different players for the final round. Still, Woods and Garcia proceeded to go shot-for-shot.

That is, until Garcia got to No. 17. He and Woods were tied at 13-under, but the Spaniard’s tee shot fell short of the famous island green. On his second drive (and now third overall shot), he sent another ball into the water. Garcia eventually took a seven (quadruple bogey), then proceeded to double bogey No. 18. Thirteen strokes on the final two holes.

Woods finished 13-under. Garcia tied for eighth at 7-under.

Yet while you were following all of that drama, you may have missed out on some other highlights from the week at TPC Sawgrass:

Westwood’s Whiff
We hate to point out an embarrassing moment, but you just don’t see a swing-and-a-miss very often on the PGA Tour, especially from a stud like Lee Westwood. But an awful lie and your butt resting on a tree don’t make for an easy shot…

Get Crazy, Get Wild!
Not only is the 17th island green on the Stadium Course one of golf’s craziest and wildest holes, but Saturday at the PLAYERS Championship was “Crazy Pants Day.” The fans were out in bright colors and some might say that the clothing company Loudmouth was making sure that they were looking LOUD.

It’s #CrazyPants Day at #THEPLAYERS. Show us your crazy! twitter.com/THEPLAYERSCham…