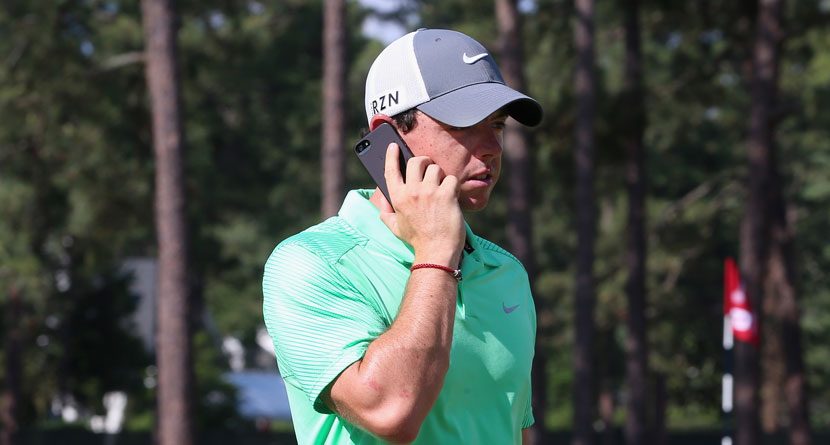 Rory McIlroy will be in the field at the Irish Open this week, but as of right now, his clubs won’t be. Following his T-23 finish at the U.S. Open, McIlroy took the trip over the pond from Newark, N.J., to Dublin, Ireland, on Monday, but his clubs got hung up somewhere along the way.

McIlroy tweeted on Tuesday morning that his clubs haven’t arrived yet, pleading for help from United Airlines.

Hey @united landed in Dublin yesterday morning from Newark and still no golf clubs… Sort of need them this week… Can someone help!?

He’s absolutely right about needing them this week, and United Airlines understands that. It responded to McIlroy’s tweet, asking him to give the company a follow and send it his bag reference ID.

An interesting form of customer service, but McIlroy’s call for help seems to have worked…kind of. Unfortunately, he won’t have his clubs until Wednesday, giving him one day to warm up for the tournament.

@McIlroyRory We have good news. Your clubs will be in tomorrow and we’ll deliver them to the tournament for you. ^JH

I’m not so sure that’s exactly “good news” for McIlroy. Maybe he should have taken Greg Norman up on his offer.

“@McIlroyRory: ….and still no golf clubs… Sort of need them this week… Can someone help!?>>WHAT COLOR BAG WOULD U LIKE? EMERALD GREEN?

Golf clubs are tough to travel with, and McIlroy learned that the hard way. If only there was a way to carry your clubs on the plane yourself … oh wait, there is. McIlroy should give the DV8 Sports golf clubs a look. They might have helped.

UPDATE: Rory McIlroy has been “re-United” with his golf clubs after a few days, and he looks very happy to have his sticks back for the Irish Open. He’ll tee off at 7:50 a.m. GMT alongside Stephen Gallacher and Padraig Harrington on Thursday.