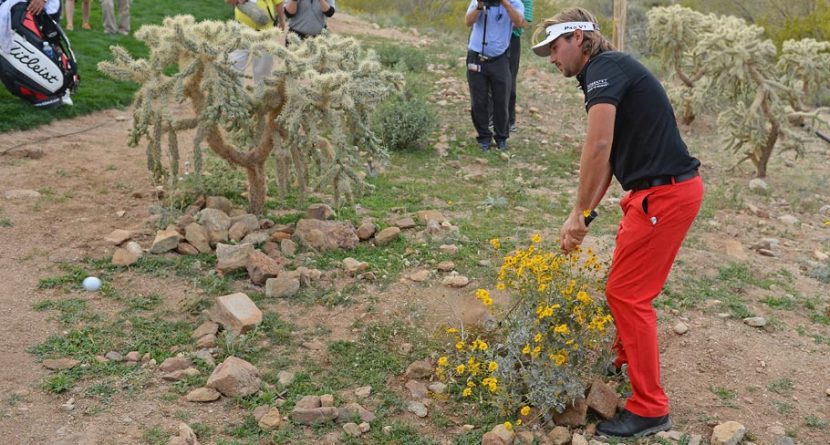 Victor Dubuisson received a gift from the Titleist tour van this week at the WGC-Cadillac Championship. Most Vokey wedges are stamped with players’ initials or nicknames, but Dubuisson walked out with something a little different: a cactus.

Titleist not only stamped a green cactus on his 58-degree Vokey wedge, but it also threw in his initials “VD” to make it a bit more personal. Michael Johnson of Golf World said the cactus was created by more than 200 hand-stamped dots, which took over an hour to do.

Dubuisson famously escaped two cacti at the Accenture Match Play Championship in his second-place finish, giving us two of the best recovery shots we’ve ever seen.

Stamped wedges have become a trend on tour, with many of the players having their clubs personalized by some of the biggest club manufacturers, mainly Titleist. Morgan Hoffmann showed off his custom Vokey wedges back in January when he had “Anchorman” quotes stamped on them.

Got my wedges all dialed in for this week @VokeyWedges #sandiego #anchorman pic.twitter.com/lUAlM9Gagu

Graham DeLaet also tweeted out a photo of his personalized Vokeys on Wednesday, as he had “Team Beard” and “Beard Mode” stamped on two of his wedges. This wasn’t the first time he’s had Titleist stamp his wedges, as last year he showed off his Canadian pride with several red maple leaves imprinted on his wedge.

Have you checked out the new Tour Trusty wedges? We’re just setting up at Highlands Golf Club #TourTrusty pic.twitter.com/th4svTZpYC

Any time I see @Y_E_Yang’s name on the leaderboard, I flash back to Colonial in 2012 when I saw this. #Golfweek pic.twitter.com/IS7Jm1smD8

Here are some other personalized wedges that feature more than just initials.