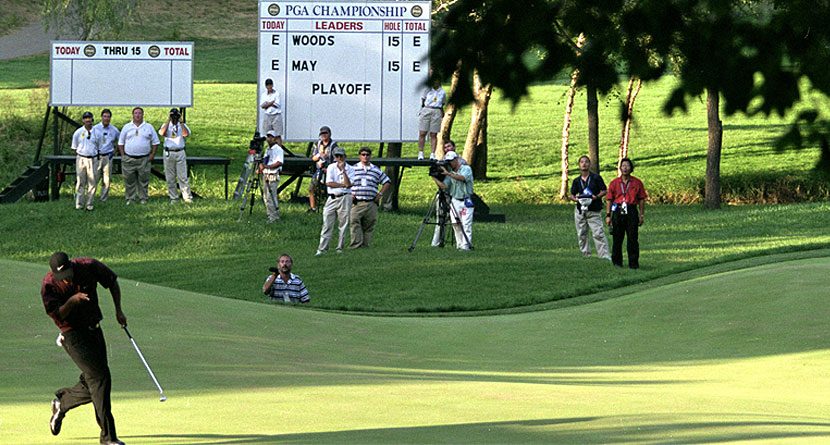 Tiger Woods’ decorated career is littered with great moments. They’re iconic moments of triumph and wizardry, if you will. His ability to make shots under pressure is unmatched by any other player.

The 2000 PGA Championship at Valhalla provided us with one of those historic shots. Well, two shots, actually.

Woods came to the 72nd hole tied with Bob May, knowing a par wouldn’t be enough to win the tournament. He needed to make a birdie. May made an 18-foot putt for birdie, leaving Woods with a six-footer to force a playoff. As you’d expect, he drained it to extend the championship. But that was only the first of two memorable putts that day. The second was even more iconic.

On the first playoff hole, No. 16, Woods sank a long putt and was nearly at the hole before the ball fell. He walked it in and pointed at it.

You know exactly what putt I’m talking about. It’s unforgettable.

But this isn’t the only memorable shot Woods has hit on the 16th hole of a tournament. It seems there’s just something about the 16th hole and Tiger Woods.

It all began in 1997 when Woods hit a hole-in-one at the 16th of the Phoenix Open at TPC Scottsdale. The shot was impressive, of course, but the celebration and reaction by the crowd was equally fantastic:

In 2005, Woods hit another signature shot on the 16th hole … this time at Augusta National during the Masters.

Woods held a one-stroke lead at No. 16 with a difficult chip in front of him. He played the shot perfectly as it rolled across the green, down towards the pin, and hung on the lip for what seemed to be an eternity. When it dropped, Woods was as fired up as ever heading to the 17th tee with a two-shot lead.

He would go on to bogey the final two holes, allowing Chris DiMarco to slide into a playoff. But Woods would eventually win the playoff and his fourth green jacket, with that single shot playing a huge role:

To this day, I still don’t know how he made that shot. It’s simply incredible.

Finally, Woods turned what appeared to be a coincidence into a trend. In 2012 at the Memorial Tournament, Woods found himself with an extremely difficult lie on the 16th hole.

His ball was buried in the deep rough with a pond just past the pin. He had to hit it close, the margin of error was minuscule, and Tiger did just that and more.

Even though it seems like Woods’ most clutch shots come on the 18th hole of tournaments, 16 seems to be the one where all the magic happens. Coincidence or not, it’s a pretty cool trend.

It’ll be interesting to see his performance on the 16th hole at Valhalla this week, 14 years later. Especially if he makes it to the final round when fans pick the hole location.