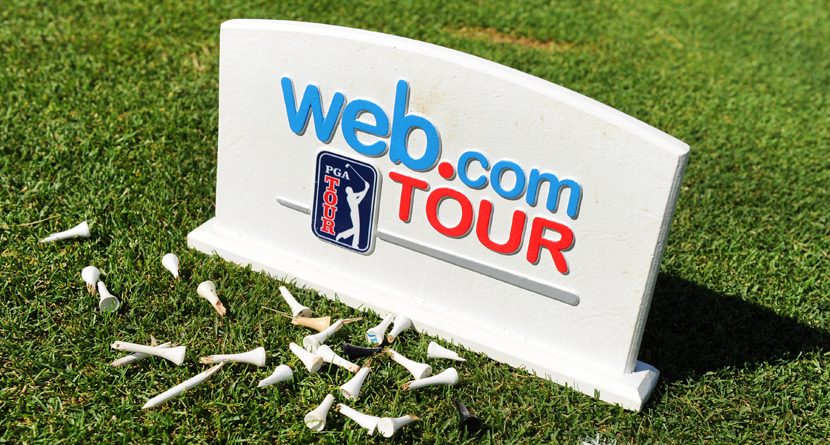 When it was announced a year ago that the qualifying system for the PGA Tour was going to be altered, a lot of feathers were ruffled.  Ok, “altered” is a mild description. The PGA Tour blew the darn thing up.  The media was screaming that the Rickie Fowlers and John Huhs of the world would be left out.  Now that we are halfway through the Web.com Tour Finals it is clear that the new system will be a far better test and produce players who are battle tested and ready for the PGA Tour.

For those who haven’t been paying attention, here’s how it works.   Players who rank 126 to 200 on the PGA Tour money list and the top 75 from the Web.com Tour are currently playing a four-tournament series that will issue 50 PGA Tour cards for the 2013-14 season.  The top 25 on the Web.com Tour are already factored in to those 50 cards, but their finish in the four tournaments will determine their order of priority.

That’s the simple explanation.  Here’s reality.  It took a little over $100,000 to finish 200th on the PGA Tour money list and just under $70,000 to finish 75th on the Web.com Tour.  When you consider that Tiger won over $8 million and that the 125 player made over $600,000 on the PGA Tour the guy down there at 200 on the money list had a terrible year.  Most weeks a top ten finish would be enough to ensure a top 200 money list finish.  It’s a little tougher in The Web.com Tour to finish in the top 75 but every year there are plenty of players who had no status to start the year who manage to do it. One of the players who finished 126 to 200 on the PGA Tour money list who was not otherwise exempt was Trevor Immelman.   The 2008 Masters Champion’s five-year exemption ran out the week of the Wyndham Championship.  It is no surprise that the most decorated player in the field rose to the top and won the first ever Web.com Tour Finals event insuring that he will be back on the PGA Tour to start the new season.

Sean O’Hair, a four-time winner on the PGA Tour had easily the worst season of his career.  He had no top 10 finishes, 12 missed cuts and withdrew 3 times.  But in the first of the Web.com Tour series events he finished 11th, his best finish of the season shooting 11 under on the weekend.   It seemed likely that he could take that momentum into the Chiquita Classic but Sean missed the cut by a shot.  Halfway through the series he’s right on the bubble.  For players like Sean the tension is building while time is running out.

At the other end of the spectrum is Peter Malnati who  started the season on the NGA Tour and has earned a PGA Tour card.  Peter qualified into the Air Capital Classic and finished 15th . (Non-exempt players who finish in the top 25 are in the following tournament.)  He then finished in the top 25 the next two events.  In August he broke through in his 7th event of year and won the News Sentinel Open guaranteeing a spot in the top 25 on the money list.  He is battling through the series to earn the highest priority number he can heading into the new season.

These are examples of how the system is working for veterans and for players who had no status.  The final question is how it will work for the international players who likely have to play a full season on the Web.com Tour to earn a place on the PGA Tour.

Dawie van der Walt won for the first time on the European Tour this year.  The win gave him a full exemption in Europe however he came to the Web.com Tour in an effort to play his way onto the PGA Tour.  In 11 events he finished 52nd on the money list easily earning a spot in the Web.com Tour finals.  The rest is up to him.

The real beauty of this new process is the combination of players at various points in their careers battling it out for their professional lives.   When a major champion like Immelman is battling a kid like Patrick Cantlay, who could still be at UCLA, the competition is beyond compelling.  That is what the first of the Web.com Tour Final tournaments brought us.

Q-School was compelling because of the shock factor.  A player could literally be in a position where they needed to par the final hole to earn his job.  That drama will still exist at the Web.com Tour Championship Sept. 26 to 29th.  However those who earn the ultimate reward will have done it over a four-tournament series rather than a six-day tournament.

The Chiquita Classic brought us Will MacKenzie, a two time winner on the PGA Tour and Andrew Svoboda battling down the stretch.  It was Svoboda in a playoff over the veteran.  For Andrew it was all about position after finishing 25th on the Web.com Tour money list to insure a Tour card.  For MacKenzie it was about going home to the PGA Tour and second-place money will ensure that happens.

It is a shame that the Web.com Tour Finals fall at the same time the FedExCup Playoffs are going on.   It’s a bit tough to compete with the biggest payoff in the sport.  But for golf fans who want to get ahead of the curve, this week the Nationwide Childrens Hostpital is played on the Scarlet Course at Ohio State and then in two weeks the Web.com Tour Championship is on the Dye’s Valley Course at TPC Sawgrass.   Great golf with a twist on wonderful golf courses… do yourself a favor and check it out.

This is the real Big Break.

Other Hot Links:
– Tiger Woods, Rory McIlroy Set For 1-on-1 Rematch in China
– Dick Fowler P.I. Is Back: Driver vs. Driver
– 13 Most Memorable Moments from PGA Tour’s ‘Regular Season’